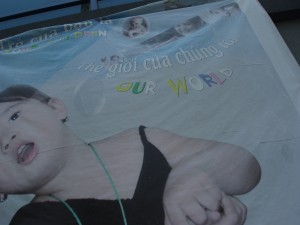 Editor’s note: Austin Argentieri co-wrote this piece. He is a senior cultural/visual anthropology student at Temple University who is currently conducting thesis research on Vietnamese sacred space and culture in Philadelphia. He has previously assisted with the research and filming for an ethnographic survey of Vietnamese culture in Philadelphia in collaboration with Paul Brian Osorio and Dr. Jayasinhji Jhala of Temple University, which will broadcast on PhillyCAM and MiND TV In the coming year.

Philadelphia boasts one of the largest Vietnamese populations on the east coast.[i]
Indeed, until the widespread Mexican immigration that began in 2003, the Vietnamese were the largest foreign-born group in South Philly east of Broad Street. 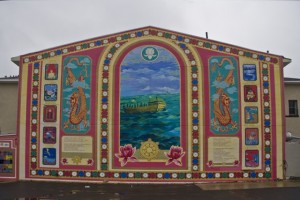 Yet the history of the Vietnamese community, a large concentration of which is in South Philadelphia, is essentially untold and understudied. And unlike other Vietnamese enclaves in the US, there’s no gaudy, generically “Asian” archway entreating the passersby to explore, just a string of unannounced shopping malls and a smattering of nearby businesses integrated into the ever-evolving immigrant territory of the Italian Market and the building materials bazaar along Washington Avenue.

Beginning in the late 1970s, refugees from Vietnam–many of them from the anti-communist South–concentrated in poor urban and rural areas of the US. There they established businesses and a community life anew–before then, there had been little Vietnamese immigration to America. Karin Aguilar-San Juan calls this process “territorialization”, defined as the act of not only creating a space for Vietnamese social life and enterprise, but also forming an identity strong enough to go beyond community cohesion to generate political leverage (2008:10).

As with other Vietnamese diasporic clusters in America, the process of territorialization in Philadelphia has taken the physical form of shopping malls. The 1990 opening of the Hoa Binh Plaza at 16th St. & Washington was followed by Wing Phat Plaza at 11th and Washington later in the decade. Both malls were eventually dwarfed by the 1998 construction of the New World Plaza and 1st Oriental Supermarket at 6th and Washington (Pappas 2005). Shopping malls have become a common venue for Vietnamese commerce throughout the US, the most well known of which are located in Westminster (a suburb of LA) and Falls Church (a suburb of DC).

There is at least one cultural precedent for this shopping mall typology. During the Vietnam War, the influx of American soldiers in South Vietnam precipitated the rapid construction of housing, lookout posts, and infrastructure in many cities and towns. The word “building” (pronounced “bin-din” in Vietnamese) was introduced into everyday language at this time to describe this new construction that took the form of simple, geometric high-rise buildings with plain concrete façades (Huynh 2005: 211). To many, these stark structures represented the American dream of accumulating wealth in a free market economy (Huynh 2005: 211), a goal the diasporic community later pursued with much vigor and success in the US. 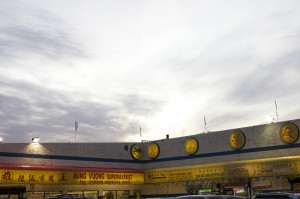 Vietnamese American enclaves are driven by the dual goals of reconstituting the former Saigon overseas and defying communism through successful capitalist enterprise (Lieu 2011:27). Their entrepreneurship took the form of small family businesses, as factory jobs were on the decline or they were otherwise unable to find work corresponding to their skills (2011:33). Some of these businesses took up shop in Vietnamese strip malls. Perhaps the horizontal format of these strip malls allowed minimal initial development to be followed by successive expansions as the community accumulated capital. 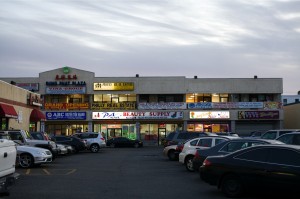 Beyond the general shopping mall format, Philadelphia’s Vietnamese community diverges architecturally from its counterparts elsewhere in the US. In other American metropolitan areas, including Westminster and Falls Church, the Vietnamese commerce centers prominently feature both French colonial and “Asian” architectural elements. Yet in Philadelphia, the Vietnamese accents are much more subtle. Look closely and you’ll notice that parts of New World and Wing Phat Plaza have second floors, with sliding doors and balconies—all features foreign to typical suburban strip mall design. Venture inside Wing Phat Plaza to discover that the stores are all connected to and accessible by interior hallways.

The distinctive features of these malls are easy to miss. But Aguilar-San Juan’s Little Saigons describes how the goal of each Little Saigon—whether ostentatiously or subtlety designed—is the same: to create a sense of “solidarity and significance” among the local Vietnamese (2008:3).

Given the lack of research into Philadelphia’s Vietnamese population, we cannot be certain why Vietnamese-American strip malls in the city differ from those in Westminster and Falls Church. We suspect that the desire for distinction from Chinatown may play a role. In our local field research, many young Vietnamese-American college students wish to be recognized for their unique Vietnamese culture, rather than be grouped under the umbrella “Asian” ethnicity or, even worse, be conflated with Chinese culture. In many Little Saigons, the interlaced and often interdependent relationship between the Vietnamese and Chinese American communities is complex and contentious (Lieu 2011:47).

In Westminster and Falls Church, the suburban locations of the Vietnamese communities help distinguish them from downtown Chinatowns. The struggle for the Vietnamese population to be recognized in Philadelphia is particularly acute, as Chinatown is a quick bus ride away and many Vietnamese refugees worked in Chinatown when they first arrived in the city (Pappas 2005). The Vietnamese landscape of South Philadelphia places such businesses in both dialogue and contrast with the more iconic Chinatown. Whether or not we can say that this distinction is deliberate, the contrast surely functions as a strategic assertion of ethnicity.

That assertion continually takes the form of real estate development. According to the Office of Property Assessment, approximately half of the properties on and around the 500 block of Washington Avenue, site of uptick of construction on the 500 block of Washington Ave multiple ongoing projects, are Vietnamese owned, including several that were sold in the past year. This may in fact indicate that with Center City expanding south and property values in Bella Vista still rising, real estate development is for some Vietnamese a way to territorialize while seeking access to the American Dream.

2011  The American Dream in Vietnamese. Minneapolis: University of Minnesota  Press.

[i] Recently, Temple Anthropology professor Dr. Jayasinhji Jhala and a production crew have undertaken an ethnographic study of the Vietnamese community in South Philadelphia, generating some of the first research on the group. The preliminary video footage from this research can be found HERE and an ethnographic blog concerning Vietnamese religion and culture that sprouted from this project can be found HERE.