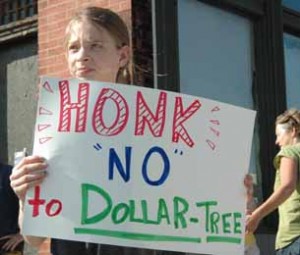 On November 18–but only now revealed–the Department of Licenses and Inspections revoked the permit for a Dollar Tree store at Chelten Plaza. In anticipation of that move, forced by a lawsuit brought on by neighbors, 8th District Councilwoman Donna Reed Miller introduced, and got passed, a spot zoning ordinance allowing the store, the 13th dollar store outlet in Germantown.

“This decision is a full and complete vindication of the Germantown organizations who challenged the permit,” wrote Yvonne Haskins in an e-mail today, lead council to the neighbors challenging the move to replace a supermarket with low end stores at the shopping center, which is to open Friday. “Despite what some may say (i.e., the Dollar Tree is still going to be a fact of life in Germantown and, therefore, isn’t it a “Pyrrhic Victory”?), I and others know that this fight, this appeal stood for much more than Chelten Plaza. And we have not ruled out filing a lawsuit to invalidate the Miller amendment as impermissible spot zoning, due to its discriminatory and unjustified content,” wrote Haskins.