At Drexel, Knocking Down The Fortress Door 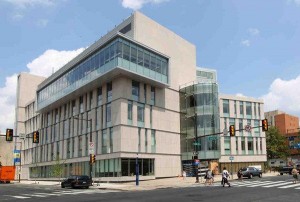 Editor’s Note: This article is drawn from a “Crossing the Lines” post, found HERE. 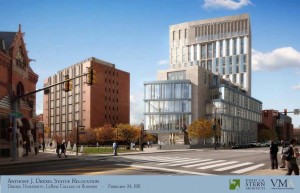 These are elements associated with a late 1950s through 1970s design style called Brutalism, responsible for some of the ugliest buildings today marring our city: at least one blog devotes a weekly column to such buildings. Rare is the Brutalist masterpiece–perhaps only Louis Kahn and I.M. Pei successfully made it work. Worse still, the social upheaval of the 1960s bought a new design emphasis on securitization; these structures were quite literally fortresses of concrete. 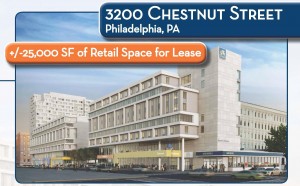 To say a building is Brutalist implies that it is either passively or actively unsightly.

But look closer. While much Brutalism relied on the fortress metaphor–overscaled, antihuman, and intimidating–at the street level, these projects are very different. Walls of glass. Multiple sidewalk uses. Eye-catching details at the pedestrian level. These buildings look Brutalist, but hardly are, in a certain sense. It is as if Drexel is knocking down the fortress door.

Together, these buildings will make an excellent counterpoint to the upper campus’ avant-gardism, manifested most strongly in the Daskalakis annex and Erdy-McHenry’s Race Street and Millennium Halls. Moreover, Brutalism was always at its best when realized in limestone, which lends an aura of gravitas to whatever style it’s used for, from Beaux-Arts classicism to Art Deco ornamental modernism and on to midcentury Moderne–and finally Brutalism. This dignity is fully appropriate for a campus heart, and contrasts charmingly with the upper campus’ Bauhausian playfulness–but quite poorly with the ugly and increasingly dated original academic orange-bricked Brutalist buildings that have defined Drexel’s style for so long.