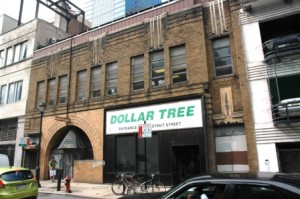 Sansom Street and City Avenue: could any two Philadelphia streets be more dissimilar? Central versus peripheral, squeezed versus sprawling, a glorified service alley versus a wannabe expressway. One would expect this study in contrasts to play out architecturally as well, and for the most part it does. With one odd exception.

1521 Sansom is a building I know well. I admire its scruffy little art deco façade every time I leave Oscar’s Tavern (or the Nodding Head, or the Oyster House….) I’ve written about it elsewhere, and love to point out the bizarre homage to Frank Lloyd Wright that someone added to it sometime in the 1980s. But until a recent trip out West, I had no idea that the building has an even more unlikely twin. 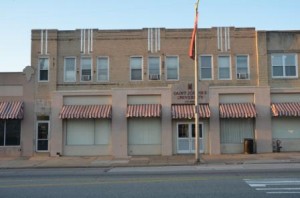 215 West City Avenue, on the Merion side, is a long way from Sansom Street, but the resemblance is uncanny. Was this the work of a drafting room pirate? An architect on auto-pilot? Are there any more of these doppelgangers out there?