Editor’s Note: This is the last of a four part, year-end series on the continued loss of Philadelphia’s epic architectural inheritance. Please also see Nathaniel Popkin’s reckoning for Philadelphia’s haphazard preservation apparatus “Still Trashing Ourselves” HERE, Peter Woodall’s photo-word essay on the Cramp Turret and Machine Shop, “Wish You Were Here” HERE, and “Demolished Buildings of 2011, Part One” HERE.

Conkling-Armstrong Terra Cotta Co.
A rather ordinary–even homely–factory building on Wissahickon Avenue, just north of Hunting Park, was all that remained of the plant’s half dozen buildings. Conkling-Armstrong produced decorative terra cotta for some of the most ornate buildings in Philadelphia, including two downright baroque religious publication society structures–the Witherspoon Building, also known as the Presbyterian Board of Publication at Walnut and Juniper Street, and the American Baptist Publication Society at 1420 Chestnut Street. The company had a major presence in New York City, and supplied cities up and down the Eastern seaboard. By the 1920s, Conkling-Armstrong had moved into providing terra cotta for movie houses, like the Anthony Wayne cinema in Wayne, PA pictured above.

The Spectrum
The Boss, Doc, Sir Charles, AI, the Big 5, Joe Frazier, Marvin Hagler, Mike Tyson, the Broad Street Bullies, the Legion of Doom (hockey and wrestling), Rowdy Roddy Piper, the Doors, the Who, Pink Floyd, and on and on. No building in Philadelphia held so many memories for so many people as the Spectrum–period.

Frankford Arsenal
The entire Frankford Arsenal–all 86 acres and 167 buildings of it–was sold to developer Mark Hankin for $3.5 million in 1983, financed via low interest loans from the Philadelphia Industrial Development Corporation. Since then, Hankin hasn’t exactly been creative in redeveloping the property. Over the past year and a half he’s been demolishing the northern, more industrial end of the property, with hopes of attracting big box retail–which has yet to arrive. Read more about the situation HERE.

Sidney Hillman Medical Center
A modernist building placed at an oblique angle to the street, Sidney Hillman was better loved by architects than by the general public. Regardless of aesthetics, important historically as an example of labor unions–in this case the Amalgamated Clothing Workers of America, which was led by Hillman for 30 years– becoming social service providers after WWII. It is being torn down to build a 33-story apartment tower with retail on the first floor. Read more about it HERE

Poplar Street A.M.E. Zion Church
A pretty little church with unusually narrow windows. The congregation left in 2004, and sold the building to a developer last year.

Jumbo Theater
While the Jumbo wasn’t torn down, its identity as a theater was revealed, then sealed once more in the course of building a DEAL$ market. This brief glimpse was even more tantalizing, considering that the building might have been restored as a performance space, if plans for a music venue hadn’t been shot down by neighbors several years before. Check out some great shots of the Jumbo interior HERE.

Julia De Burgos Middle School/Edison High School/Northeast High School
The massive, Gothic school complex on 8th and Lehigh was slated for demolition after the Philadelphia School District sold it to a developer last year. Fire gutted part of the building this summer, but it remains standing for the moment. 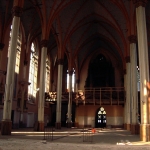 St. Boniface Church
The Norris Square Civic Association is tearing down the historic church, which served Kensington for more than a 130 years, to build affordable housing on the site. Demolition hasn’t begun yet, but could start before the end of this year.  Read more about about St. Boniface HERE and HERE, and see more photos of the church interior HERE.