Demolished Buildings of 2011, Part One

For 60 years these two elegant brownstones and the small, stone church between them was home to the Poor Clares, an order of nuns known for baking communion wafers for Catholic churches throughout the region.  The complex was bought and sold several times after the Poor Clares left for the suburbs in 1977. The most recent owner’s initial plan would have restored the buildings, but a later plan called for demolition in favor of new town homes. All along the owner allowed the buildings to deteriorate–perhaps a truer indication of intention–making demolition a fait accompli. Although located in the federal Girard Avenue historic district, the monastery was not listed on the Philadelphia Register of Historic Places, and thus was not protected from being torn down. Read more about what happened HERE. 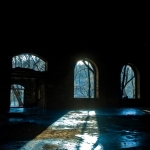 With its massive arched windows,  Shawmont was “one of the most beautiful and evocative sets of ruins in Philadephia,” wrote Mike Szilagyi in his article about their dismantling in July. The station was built in the 19th century on the banks of the Schuylkill northeast of Manayunk to pump water from the river to Roxborough reservoirs. It was decommissioned in 1960, and no further use for the building was found, until finally the Fairmount Park Commission decided it was in immanent danger of collapse.

In July, the two buildings that comprised the Crompton & Knowles Loom Works at 16th and Glenwood were demolished quietly. The loom works, which graced the northeast corner of 17th and Glenwood, was founded in 1879 when two rival companies joined forces. Just four years ago, one of the company’s namesakes, George Crompton, was inducted into the National Inventors Hall of Fame for inventing the loom that revolutionized the production of textiles.

Kensington lost another historic textile mill this summer–or rather part of it. The City of Philadelphia demolished the older half of the Orinoka Mill on 2753 Ruth Street due to falling brickwork.   The building had been vacant for more than a decade. Workshop of the World has a small write-up about Orinoka’s history HERE. Last year, the former Washington Mills on East Hagert and Emerald Street caught fire and was subsequently demolished. Read more about Washington Mills HERE.

The building was the last structure left from the Cramp Shipyard, a business that had dominated that stretch of waterfront for more than a century. The company built the “New Ironsides” for the Union during the Civil War. Cramp boomed during WWI, went belly up in 1927, but was called back to action during WWII, when it employed more than 15,000 people and covered 65 acres. The shipyard closed again shortly after war’s end, and all of its buildings were torn down save this one. And if that wasn’t enough, a Cramp naval engineer, inspired by one of the tension springs he worked with, invented the slinky. The toy debuted in 1945  at the Gimbel’s Department Store in Center City.

Rachel Hildebrandt contributed to this article