These Walls Can Speak 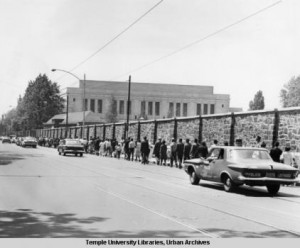 The film opens with the 1965 civil rights protest outside the thick wall that surrounds the school. The boarding school was a breakthrough in American education (and philanthropy), in that it sought to educate and unserved population, orphan boys, who otherwise might be lost to society. But under the provisions of Girard’s will, and entirely consistent with the legal and social norms of the day, only white boys could attend.

As the African-American population in North Philly grew in the 1940s and 50s, the Girard wall thus became a symbol of exclusion, inequality, and racism. In the 1950s the US Supreme Court ruled to desegregate the school, but a Pennsylvania court used a legal maneuver to ignore the ruling. The school was administered by the Board of City Trusts for decades and then by a group of 13 trustees starting 1957. The trustees, like the Board of City Trusts, maintained that the school could determine its own admissions policies and that they were merely honoring the terms of Girard’s will by excluding African-American students. 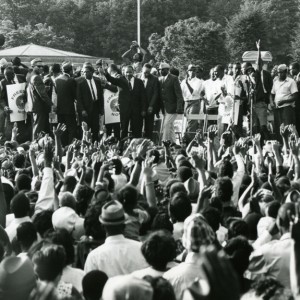 Led by Cecil B. Moore, head of the Philadelphia chapter of the NAACP, the effort to force the school’s integration began on May 1, 1965. The initial plan was to meet there at dawn that day and literally go over the wall. But informants had warned the police and hundreds of officers surrounded the school. So the plan changed to non-stop marching alongside the wall. The picketing went on for seven months and 17 days; it was the longest civil rights protest in the United States at the time. The Reverend Martin Luther King, Jr., came to address demonstrators on August 3, 1965. He said the wall would crumble like the walls of Jericho.

That December, a suit challenging Girard College’s admissions policy was filed in U.S. District Court by city and state officials, as well as the mothers of seven African-American boys seeking admission. The following September, Judge Joseph Lord ruled that African-Americans could not be excluded from Girard College on the basis of race under Pennsylvania law. When the trustees voted to appeal the holding, picketing resumed outside the college walls.

The Third Circuit Court of Appeals reversed the decision in February, 1967, ruling that the case should be decided according to constitutional rights rather than state law. That July, Judge Lord concluded that the seven African-American students were denied equal protection under the 14th Amendment to the U.S. Constitution and that they could not be denied admission because of their race. On March 7, 1968, the Third Circuit Court of Appeals unanimously upheld the ruling. With the United States Supreme Court refusing the review the matter, the Girard College trustees soon voted to admit African-American students to the school. Four African-American boys passed through the gates. 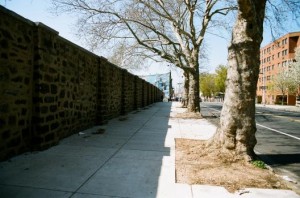 Modern view of the wall of Girard College along College Avenue. Retrieved at http://northerncity.library.temple.edu/content/collections/desegregation-girard-college/where-then-and-now

The figurative walls of the college had come down for African-American males, but what about the actual stone wall itself? Stephen Girard had set forth in his will exactly how the wall around his school was to be built. His requirements were detailed and burdensome, but generally, according to his plan, the wall enclosing Girard College is 10 feet high and 14 inches thick.

It was once widely believed that Girard wanted the school to be surrounded by a 20-foot wall, and that his benefactors, seeking to be in total compliance with the will’s provisions, supposedly began the wall 10 feet below ground so that it would not be as tall. This story, however, is not true.

The wall is ten feet high, and fourteen inches thick, yet, among all the many thousands of rough irregular stones in it, there is but one round stone, and this is located in the Ridge Avenue side of the wall seven feet from the ground and about 100 feet from the South College Avenue. This odd stone has puzzled pedestrians for many years. The boys in the neighborhood now call it the “lucky stone,” and if they throw something and can hit it, they feel that good luck will follow them all that day.

There is a legend, however, concerning this stone, which runs somewhat as follows: When the wall was being erected in 1846-47, Ridge Road was merely a rough country roadway with but few dwellings on it. The stone was inserted in the first section of the wall to be built to commemorate the death of William Morris, the victim of bandits, who had held up his mail coach.

The huge pile of stones clumped here for building the wall afforded a safe hiding place for three footpads [highwaymen]. When they sprang out and commanded him to stop, the driver (William Morris) refused and urged the horses onward. Angered by this, the bandits seized the horses’ heads and a shot from one of them put an end to the driver’s life. There were no witnesses so the crime, but twenty years later a man dying in the Almshouse confessed to his share in the murder. The other two bandits had died earlier.

The day after the murder, the stone masons found the mail coach, minus the horses, which the bandits had taken, and the body of Morris lying beside the road. The head stone mason was a friend of the murdered man, and, by agreement with his co-laborers, the round stone was inserted in the wall in memory of the deceased. No word being chiseled on the stone, few of thle older settlers in Philadelphia knew of the event, but it is a lasting memorial to a man who gave his life in discharge of his duty.

Earlier accounts of this perfectly round stone had it that neighborhood boys had to spit upon it and make a wish as they passed by in order to obtain what they wished for. Failure to do so would get them bad luck.

Elizabeth Laurent at Girard College reports that the “lucky stone” is on the short, eastern campus perimeter wall (the Ridge Avenue side), just to the left of a buttress, and about 2/3 of the way up from the sidewalk.