Beachcombing By The Airport 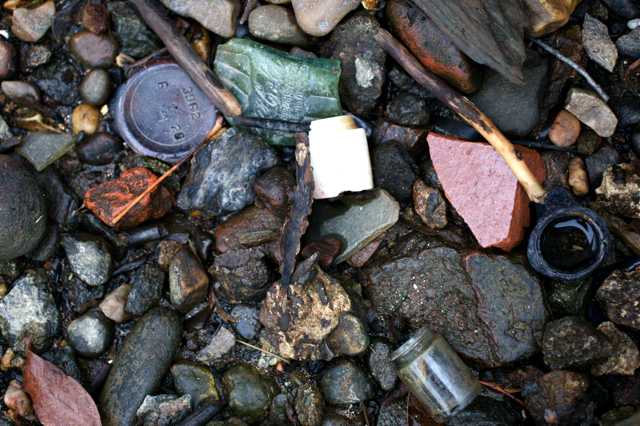 Driving down Fort Mifflin/Hog Island Road through the marshy land between the Philadelphia International Airport and the Delaware River, the city recedes out of sight, and boundaries become hard to discern. Philadelphia ends just past historic Fort Mifflin, and Delaware County begins, but Bow Creek, the meandering tidal stream that once marked this transition, no longer exists. The course of the creek is still memorialized on maps by the county line that snakes across the eastern end of the airport (which, despite its name, is mostly located in Delaware County). But no sign announces this jurisdictional change, as if neither county cares to claim this swampy territory as its own. 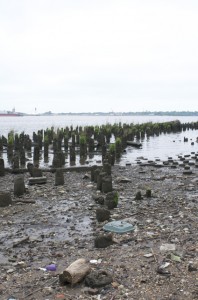 I visited this no-man’s-land recently with Peter Woodall, to see a patch of shoreline which he promised would yield some treasure—if your idea of treasure is chunks of broken bottles and rusted metal. I am a trashpicker, beach comber and dump digger of many years standing, so I felt at home clambering among the slippery rocks and broken pilings at low tide, searching for treasure in the muck. This spot had been part of the Hog Island Shipyard, which had a brief run building military ships from the end of World War I into the early 1920s. The pilings were the only evidence left of this massive enterprise, which once employed thousands and included 50 riverfront shipways, where 50 ships could have conceivably been built at once.

As we gathered a basket full of what most people would consider trash, Pete and I mused about how all this material came to reside here. As with much of the Delaware riverfront, this shoreline is not natural, but was created by massive landfilling operations. Beginning in the last quarter of the 19th century, muck and silt dredged from the river in channel deepening projects were dumped on the city’s lowlands, converting what was deemed unhealthy wasteland into productive solid ground that could be built upon (and taxed by the city). Some of the material Pete and I found could have been part of those dredge spoils. Other stuff might have come from trash dumped here (either legally or illegally), since this was another way swampland was filled in. The metal artifacts were likely from the shipyard days, and some of the glass might also have been discarded by shipyard workers—which would explain the many broken bottle bottoms marked “Continental Distilling,” but not the many white glass containers of Pond’s Cold Cream.

As unnatural as this shoreline was, I was still excited to get down and dirty with the river that has played such an important role in the city’s history. The city offers little access anywhere along its many miles of Delaware riverfront; most of it is blocked by highways, industry (active or abandoned), rail yards, and abandoned piers behind cyclone fences.

Little if any of this shoreline is as it was when William Penn arrived here; most if not all of it has been altered as drastically as the section Pete and I explored. Even along the Schuylkill River, which winds through miles of Fairmount Park, little original shoreline remains, much of it having been filled out to bulkheads to level our the riverfront parkland. 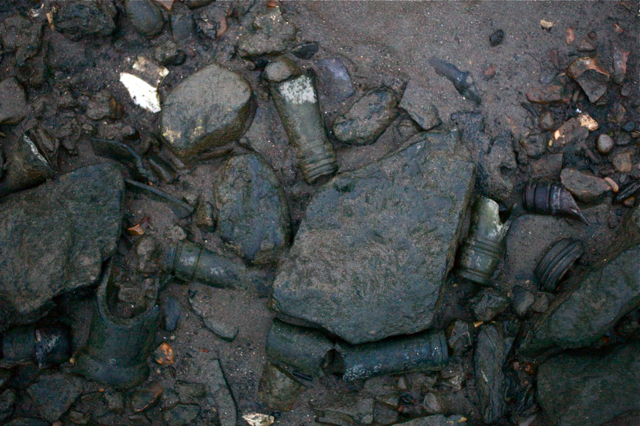 One of the only accessible undisturbed patch of shoreline along the city’s two major rivers exists at the bottom of Bartram’s Garden, where the remnants of a cider press still show in a boulder. Of course, the view from here is vastly different now: where Bartram, in the 18th century, would have looked across the river at the mostly undeveloped land of South Philadelphia, a visitor today sees the huge tanks of a gas works.