A Church, A Riot, A Steeple, And The National Shrine of Santo Nino 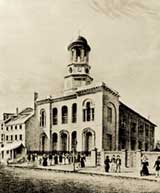 There is Saint John’s Evangelical Lutheran Church (demolished in 1924 for the Ben Franklin Bridge) and St. George’s United Methodist Church (“the church that moved the bridge”). (See my previous story on St. John’s HERE.) Directly across from St. George’s on Fourth Street is St. Augustine’s Roman Catholic Church, which was also spared in the construction of the bridge. St. Augustine’s is the “adopted” church for many Filipino-Americans in the Philadelphia area. On January 11, 1992, a statue of Santo Nino (the Holy Child Jesus) was installed at St. Augustine’s and the church is the national shrine for devotion to Santo Nino in North America.

But we begin with Saint Augustine of Hippo Regius (Algeria), one of Christianity’s greatest theologians. He made his mark on religious practice by bequeathing a set of guidelines (or “Rules”) for living the common life. After his death in 430 A.D., monks and hermits fled to Europe where they established monasteries, particularly in Italy. In 1244, Pope Innocent IV formed the Order of Saint Augustine by uniting these monks and ordered them to follow Saint Augustine’s Rule. The Augustinians spread rapidly throughout Europe, where in England they were known as the Austin Friars. 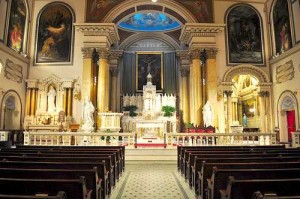 The Augustinians came to America from Ireland in 1796 and established parishes along the Eastern seacoast. In 1798, two Augustinian friars acquired a property on Fourth Street below Vine to serve the increasing number of German and Irish Catholic immigrants who settled in the northern section of Philadelphia and Northern Liberties. This was the first Augustinian parish in American, so St. Augustine’s Church is the mother church of the Friars in the United States.

Notables such as President George Washington, Commodore John Barry and Stephen Girard contributed to the building fund of the original church on this site. Designed by Douglas Fagan and completed in 1801, St. Augustine’s stood as the largest church in the city at that time. The Friars carried their missionary work into the Hudson Valley, New England, New Jersey and Western Pennsylvania from here. 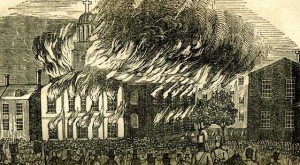 The Augustinian Order is known for conducting schools, colleges and universities around the world. The Austin Friars founded St. Augustine’s Academy—the forerunner of Villanova University—at this location in 1811–and since 1842 have sponsored Villanova, the oldest Catholic institution of higher education in Pennsylvania.

The Philadelphia Nativist Riots of 1844 were a result of rising anti-Catholic sentiment at the growing population of Irish Catholic immigrants (and a carry-over of Protestant-Catholic hatred in Ireland). The Native-American Party, later called the “Know-Nothing Party,” protested against Catholic influence in politics and schools. The protests sent Philadelphia, with a fragmented police force, and a recent history of anti-black rioting, into a state of near anarchy. Catholic churches were a primary target of the Nativist rioters. 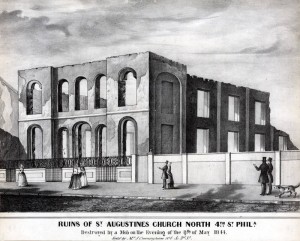 On May 8, 1844, a mob burned St. Augustine’s Church to the ground. The Augustinian Order sued the city for not providing adequate protection during the rioting. This case was one of the first tests of the rights of citizens to religious freedom under the First Amendment of the US Constitution. The Austin Friars rebuilt the church with the $45,000 in damages awarded.

The present church, completed in 1847 and consecrated the following year, was designed by Napoleon LeBrun, the architect of the Academy of Music and the Cathedral of Saints Peter and Paul. The ceiling frescoes depict scenes from “Saint Augustine in Glory.” The artist was Philip Costaggini, who painted part of the frieze on the rotunda of the US Capitol. Behind the altar is a Crucifixion tableau painted by Hans Hansen in 1926. A dome skylight illuminates the scene overhead.

That year, however, Fourth Street was lowered about 15 feet to make way for the approach of the Delaware River (Benjamin Franklin) Bridge. The entrance to the church was also lowered. A visible scar in the brickwork along Fourth Street can still be seen. The church rectory was also removed. 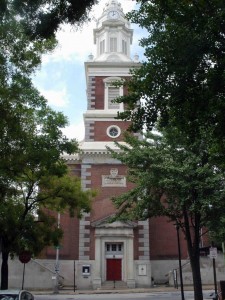 St. Augustine today. Notice the lowered entryway and the scar in the brickwork above the door.

Then, December 11 1992, a powerful storm literally blew the steeple off the church. The St. Augustine bell tower, originally added in 1829, was the work of William Strickland, who designed a similar tower for Independence Hall in 1828. The tower landed on westbound lanes of the Ben Franklin Bridge, quite a distance as New Street separates St. Augustine’s from the span. No one was hurt, but the bridge was closed for three days, and the huge hole in the roof subjected many priceless paintings and ceiling frescoes to water damage.

Insurance paid for a new steeple, which was erected in 1995.