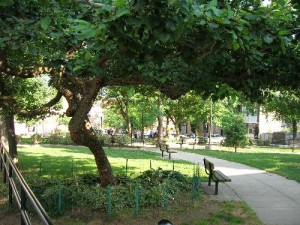 Tomorrow evening at 7PM at Eighth and Fitzwater in Bella Vista is the annual Cianfrani Park holiday festival. Santa will be there and park caretakers will turn on the “light pyramid” and plug in the menorah. I’ve been involved at Cianfrani, a place that sometimes feels like contested ground, for almost 14 years. I’ve helped resurrect its gardens, paint its fence, plant trees–including one in honor of the birth of my daughter–and I’ve even MC’d the annual fall festival. I’ve seen neighbors fight over dog use–to the chagrin of some, the park is often referred to as “the dog park”–and come together over just about everything else. One holiday about 5 years ago, the menorah was stolen; so we redoubled our effort, replaced it, and took the opportunity to talk about the neighborhood’s multi-culturalism.

Cianfrani is a small, well-used neighborhood park. Its benches are old, its trash cans insufficient, and its lawn is often brown. And yet I can’t think of a space that’s better loved by neighbors, who for more than 20 years have poured their time and money into a constant string of improvements. 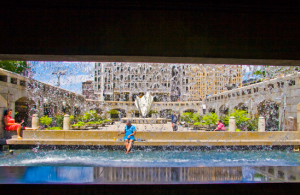 Of course, Cianfrani is not alone. There are dozens of important public spaces, and they’re not just parks, but also sidewalks, transit stations, even transit vehicles, libraries, rec centers, schools, etc. We at Hidden City would like to hear a little bit about your favorite, big or small, central or far-flung, hidden, forgotten, or forlorn. In last Thursday’s New York Times, architecture critic Michael Kimmelman writes, “the best public spaces encourage diverse urban experiences, from people watching to protesting, daydreaming to handball, eating, reading and sunbathing to strolling and snoozing.” 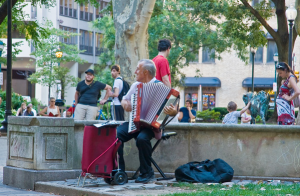 But are there other criteria you would apply to your favorite space? How about chance encounters? How about casual socializing? How about community-building, or active things like gardening?

Tell us your favorite spaces and why. Send photos, anecdotes, laments, and plans for renovation. Public space, says deputy mayor for transportation Rina Cutler, is going to be Michael Nutter’s legacy. If that’s the case, what do you think needs to happen to make more public spaces more interesting, engaging, and more inviting?