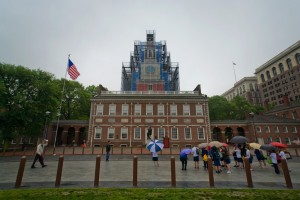 Poll the members of the Republican presidential traveling circus and it’s likely most of them will tell you they believe in “originalism” as a judicial philosophy. Originalism means the constitution, which has been amended and reinterpreted for 223 years to reflect our evolving society, is to be read and followed only as the founders themselves instructed in the original document. Never even mind the Bill of Rights.

The most dangerous originalist is Supreme Court justice Clarence Thomas, who doesn’t even bother to read case law or review legal precedent. Never mind that Thomas the originalist would only be 3/5ths of a human being according to the founders’ original instructions.

Well, originalism, which for my mind is as bankrupt and intellectually dishonest an ideology as, say, one that prescribes violence in the name of piety and holiness, is having its day in the sun. Because of the configuration of the Supreme Court, Thomas holds enormous power to shape the future of the United States.

This makes the National Constitution Center, which posits the constitution as a living document, dynamic in its capacity to evolve with the nation itself, a critical counterbalance to the reactionary forces behind originalism. The point of the museum is to engage us–all of us–in the sometimes messy but always progressive process of applying the constitution to the present day. 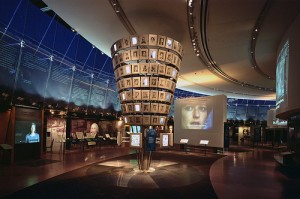 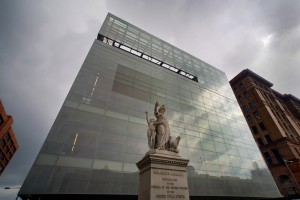 The Constitution Center is likewise responsible for opening and expanding the national story told on Independence Mall, a process more recently joined by the President’s House and the National Museum of American Jewish History. Though both are architectural disappointments–even when the videos are working the President’s House is a jumbled, dysfunctional mess and the Jewish museum fails to seduce (it pronounces its importance instead, leaving us cold)–the combined effect is to vastly widen the narrative told in “historic” Philadelphia. Now well beyond grammar school history, we have the unsettling story of slavery amidst freedom (at the President’s House) and a rather comprehensive exploration of the confusion and contradictory impulses of immigrant life (at the Jewish Museum).

These advances make it even more difficult to stomach the still prevalent tick of literal interpretation in our streetscape that reveals–rather than the dynamism and excitement of city life–a dull simplicity and provincialism. The effect is to make this city seem less interesting than it really is and make us all a little more simpleminded. Thus, a museum of the American Revolution must apparently be built of brick (why? wasn’t the point of the Revolution to rebel against inherited British ways?) and a cathedral must be built of stone. How wearisome. 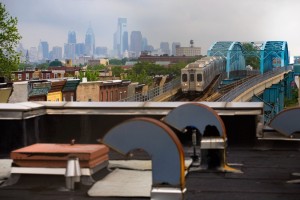 Thus, statuary memorials to Irish and Scottish immigrants must be Hallmark interpretations of literally hungry (or proud) refugees instead of imaginative explorations of historical experience, which is never only about hunger or pride. What about memory? What about landscape? What about loss? What about identity? These things are missing from both memorials. Thus, buildings and accoutrements on Temple University’s campus must by necessity be painted the school color, cherry red. Thus–in a city with only two subways lines–the stairs and seats and walls and bridges and tiles of the “Blue Line” must be painted blue and the stairs and seats and walls and tiles of the “Orange Line” must be painted orange lest we forget where we’re going end up hopelessly lost.

And thus we are still stuck with simplifying labels–Greene Countrie Towne, Quaker City–that pin us somehow to an architecture and design based in a misinterpretation and misalignment of history (is this not also a city of revolution? of machine power? of ENIAC?). “That Quaker excuse makes me want to puke every time I see it coming,” historian Michael Zuckerman told me in an e-mail. “It wouldn’t be an excuse even if it were true: Quakers haven’t been a majority of the city for 300 years (if they ever were), and they haven’t even been a majority of the rich and powerful people of the city for 250 years; basically, they’ve been 1% or 2% of the population for the past two centuries.”

Yet it goes on anyway, blindly, and we remain–quite literally–stuck. The lack of imagination is akin to pretending 223 years of constitutional evolution never happened and declaring only the original text sacred (that too of course a blind misinterpretation, to pretend that the constitution itself isn’t the product of bewildering political compromise). Like the originalist vision of history, the literal city is bankrupt and dull. It’s also one without a clear future.

Later this week in Possible City: imagining a more rigorous Philadelphia architecture of the present.