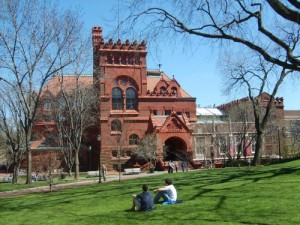 There’s Save Your Vision Week and National Forest Products Week and Banned Books Week (and about five dozen others). Here at the Daily, we decided to create another: this is Frank Furness’s week and we’re celebrating.

For me, it started with Frank. In 1989, I took George Thomas’s iconic Penn class on Furness, the point of which was to explore social and economic history through the lens of architecture, taste, and identity. It was there I learned that one can read history in the built environment. One can read culture, personality, desire, and ambition too.

One of the key themes of the class was the complicated way in which Furness was a product of and a reaction to the Philadelphia of his youth, and the way he wished, in turn, to shape the city. Like any man–even Robert Moses in New York–Furness’s power was limited. In his own lifetime, tastes changed (as they did for Moses). He fell behind, only at the end adjusting to the new neo-classicism with the design of the Girard Bank on Broad Street (now the lobby of the Ritz Carlton Hotel).

But Furness in his prime was a man of vast imagination, determination, and vision. The very fact that we can read his personality in his buildings is an argument for a vigorous architecture today. If we fail, and continue our blind pursuit of architectural imitation, we fail to tell our own story. Or worse perhaps, the story is our own lack of imagination and confidence.

Furness lacked for neither. Nor for moral backbone, nor artistic clarity. This week, as we celebrate Furness’s 172nd birthday with a series of articles by Paul VanMeter, PhilaPhilia, Peter Woodall, Dan Cox, and Justin Detweiler, and with a birthday party and celebration Saturday night, we ought to take inspiration from his example.