There’s no historical marker outside 538-40 North 3rd Street, but maybe there should be. Few city buildings reveal such a broad swath of history. And what’s more there’s a strange symmetry at play in its uses: drink house and temperance house, concert hall and piano factory.

“Temperance Hall, in North Third street below Green,” writes John Watson in his Annals of Philadelphia, “was bought by the temperance people to purify it. It had previously been known as the Northern Exchange, and was a flash sort of drinking-house, kept by John Vasey. Concerts had been given there occasionally, and in October, 1834, Joseph Jefferson—father of the present Joseph Jefferson—fitted up the grand saloon of the second floor as a theatre. It was used as such for two or three months, but proved to be a failure. During that time, and afterward, concerts were given there.” The building was originally three stories high and had a cupola with a bell that rang to call in audiences. 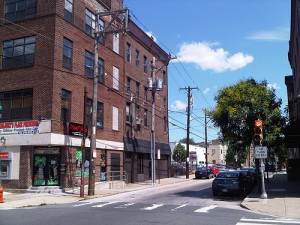 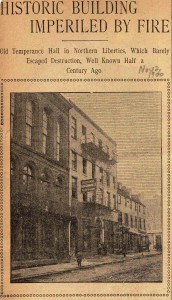 For many years thereafter, the auditorium was packed nightly with enthusiastic crowds who listened to the foremost temperance speakers of the day. Well-attended anti-slavery society meetings were also held there in the late 1830s, with a crowd at one time determined to burn the place down. Furthermore, the Advent Church used the hall as a place of worship. The congregation occupied the main room, which would seat 500-600 persons.

By 1844, the Temperance Movement had died out and the building was leased to a theatrical manager. It hit its stride during this time period, as all the prominent plays of the day were presented there. The theater closed but soon reopened to host a company of burnt-cork entertainers who called themselves “The Ethiopian Minstrels.” They were followed by a group of vaudeville-type performers called the “Serenaders.” 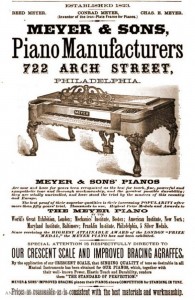 In 1852, the large auditorium was stripped of its furnishings and converted into the Conrad Meyer & Sons Piano Company factory. Conrad Meyer (1793-1881), a native of Marburg, Hesse Cassle, Germany, came to Philadelphia in 1823 and began his business on Front Street near Dock Street. One of the most notable makers in American piano history, he built a number of very high quality square grand pianos during the early to middle 19th Century. The firm’s salesroom was at 722 Arch Street for some thirty years.

As Conrad Meyer & Sons prospered, another floor was added—with a replacement cupola—to the building. Soon, nothing remained of Temperance Hall, except the exterior structure itself. The piano company occupied the upper floors through the 1880s, after which the Pfaelzer Harmonie rented the place for a club house. The building was subsequently turned into a dance hall and lodge. Since 1899, it has been used for commercial purposes only.

Today, 538-40 North 3rd Street is the main office for Elmer Schultz Services, the tri-state’s largest repair and parts center for commercial food service equipment. (Note: for some reason, the picture on the Schultz website shows windows where they are not and no windows where they actually are). Schultz worked nights at the Budd Company as an electrician after the World War II, while running a one-man electrical business during the day. In the late 1950s, Schultz also began to service commercial cooking equipment, a line of trade that soon became the business core. 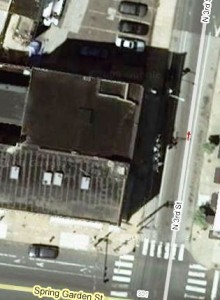 Nearly doomed by two fires in 1899 and 1900, and the near object of arson in the 1830s, the old building still soldiers on. If this structure was located just 50 feet southward on Third Street, it would have been demolished sometime in the 1920s when Spring Garden Street was finally laid down. (Spring Garden Street did not connect to Delaware Avenue until then. The thoroughfare was first opened through the Northern Liberties District of Philadelphia County between only Sixth and Tenth Streets in the 1830s and 1840s.)

The storied four-story edifice, a bit altered, is not endangered, except through its relative neglect and undeserved anonymity. Even the replacement cupola still exists, as the Google Maps overhead shot shows.