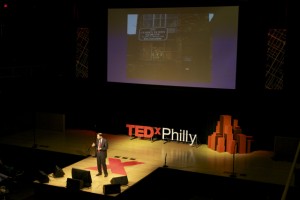 At TEDxPhilly yesterday, more than 30 speakers and performers shared their newest projects, crafts, ideas and inspirations. They revealed and discussed projects to reinvigorate public spaces like the Dilworth Plaza colored dry-mist fountain, mid-rise buildings like the Piazza as an answer to skyscrapers and suburban sprawl, and the “Green City, Clean Waters” plan for managing rainwater, promoting public health, and integrating green infrastructure.

“These people are changing the world,” said Marco Oviedo, who attended the all-day event. And, indeed, after an introduction by Mayor Nutter, some presenters deeply affected the crowd. Elementary students performed Beethoven while their director, Play On, Philly! founder Stanford Thompson, demonstrated with financial and academic statistics how the program helps the children become better students and stronger people. Gregory Corbin and Denice Froman of the Philadelphia Youth Poetry Movement talked about creating spaces where kids “can be vulnerable, where it’s celebrated to be you,” and where they learn at once “the value of their voice” and the power of collaborative learning. “Better poets mean better people. Poetry is engagement, empowerment and freedom,” they said.

Communal engagement was a recurring theme yesterday. A project for painting new murals in North Philly and Center City featured favela-painting Dutch duo Haas&Hahn as orchestrators. They showed a video to testify to the transformation of perception that occurred when they painted colorful, 3-D, eye-popping murals in what was condemned as the most dangerous neighborhood in Rio de Janeiro. The video captured 30 kids from a local school painting together and a young boy, smiling but shyly looking away from the camera, saying “Nowadays people call us artists.” Jeroen Koolhaas and Dre Urhahn haved just moved into North Philly and hope to inspire that sense of pride, production and ownership in the murals here. Urhahn said, “We have painters, supplies and energy, but we need people out there talking about it, supporting by spreading the word.” 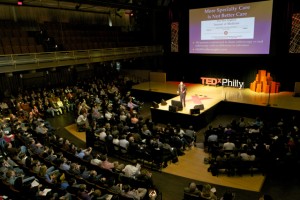 “The city is the most exciting, compelling manmade object, and we have a lot of work to do to make it better,” said presenter Young Jin Yoo. Citing similar examples from Tokyo and Seoul, the Temple professor explained his new $700,000 undertaking called Urban Apps and Maps Studio. It will instigate a new digital ecosystem to interact with local, physical surfaces. He insisted on implementing generative design rules, not just what the owner or creator came up with, which would allow anybody “to use technology to solve their own problems.”

Diana Lind rallied the audience to call for redesigning three miles of I-95 through Center City into a boulevard that will “give pedestrians access to their waterfront.”

At the end of the day Chris Bartlett, the host and catalyst of TEDxPhilly, commented on how he feels about the future in light of what compelled him to start the event in the first place. “My job was to create a strong chemical reaction between the audience and the speakers, to ensure a mutual respect so that everyone was participating and shared 100% of themselves,” he said. “I want to see the TED community grow. I want to see representatives from every neighborhood to reflect the incredible diversity of our city, and I want to see the hard work, ideas and 100 percent participation of everyone here.”