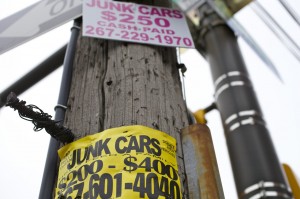 At Hidden City we often uncover the unseen in the built environment, but today we excavate the highly visible: ubiquitous bandit signs sprinkled on telephone poles and tree trunks around the city, which usually offer financial salvation to the desperate. “$$$ for Junk Cars,” “I’ll Buy Your House in Seven Minutes,” “We Buy Diabetes Strips,” they profess.

But not only do the signs often advertise scams, they are illegal, as explicitly stated in the Philadelphia City Code (Title 10 Ch. 10-1200, FYI). According to the Code, “no person shall post any sign on any: (1) utility pole; (2) streetlight; (3) traffic or parking sign or device, including any post to which such sign or device is attached; (4) historical marker; or (5) City-owned tree or tree in the public right-of-way.”

While this technically includes all community flyers, art wheatpastes, and music event promotions, one organization is trying to work the law to target plastic signs promoting private businesses and scams. BanditProject, founded by Christopher Sawyer, is drawing attention to the issue one illegal sign at a time. The project’s online database lists bandit sign sightings, to which anyone can contribute. While the issue of illegal signs is already highly visible, Sawyer hopes to render it legible and quantifiable.

Venture north or south out of Center City and watch the density of signs rise. Lower-income neighborhoods are downright plagued with the things—a double blow as these areas have less capacity to mount political and legal pressure to have them removed, and are populated by the most common scam victims—the vulnerable poor. Ultimately, bandit signs serve as yet another demarcation of Philadelphia’s increasingly polarized rich and poor neighborhoods. They are a literal sign of the times.

This quality of life issue brings political neglect to the fore. Complaints to 311 about bandit signs enter the void, and posts to the city’s contracted citizen-reporting website, See-Click-Fix are often ignored. And as Sawyer writes on the BanditProject website,  “good luck whining to the FTC [Federal Trade Commission]…or the City for being caught up in a scam commonly advertised on nameless bandit signs. Consumer protection bureaus are bogged-down with complaints all the time.” Few, says Sawyer, will bat an eye at this issue. One can’t help but wonder if the sign-posters took to the streets of Center City with the frequency and voracity that they do in, say, Port Richmond, would the city continue to be so slow to respond? (It is perhaps worth noting that cursory look at search results for “bandit signs” on the See-Click-Fix website yielded two complaints that had been translated into formal tickets, leading the the signs’ removal. Both were in the more affluent Newbold neighborhood.) 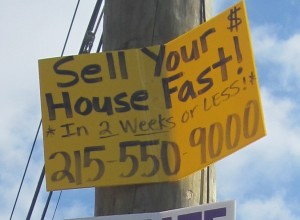 Bandit signs also represent a violent trespassing by the private sphere—nay, private and illicit spheres—into the public space. Here we have public property, the shared right-of-way of sidewalks and streets, and trees and other attempts of the City to beautify, used for unpaid advertising that not only benefits very few individuals, but outright harms other residents. Indeed, Sawyer is quick to point out that the reason many advertise through this cheap and unprofessional medium is because they are just that—cheap and unprofessional, or worse—unlicensed and illegal. Yet the City has the opportunity to turn the tide and start making money off bandit sign posters, instead of letting them make money off our most vulnerable residents. The standard fee per illegal sign is $75, though it can be as high as $300. Sawyer estimates that there are at least 20,000 bandit signs posted in the city at a given moment—you can do the math.

Sawyer hopes that BanditProject will draw needed attention to the issue and shame L&I and the Streets Department into doing their jobs in all of Philadelphia’s neighborhoods. When asked about the fact that some affected by the issue likely have less internet access and thereby less opportunity to report bandit signs, Sawyer states that it’s an “information-based campaign.” Essentially, those who can report must do so for those who cannot. While the issue is being brought to many neighborhood civics for support, those gatherings rarely attract residents with the least time and money. This is a point Sawyer concedes at a recent meeting of neighborhood leaders from Fishtown and Port Richmond civic groups. After his concession, an attendee jokingly suggests that the group post signs to reach out to those not connected to civic or digital networks. The room laughs and resolves to leave the issue up to a future gathering. 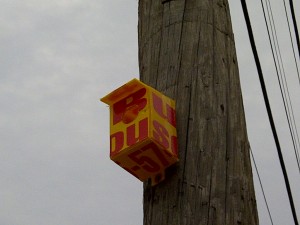 If you’re interested in helping combat bandit signs, report them to the BanditProject, and remove them when you can. They are, for the record, recyclable. Creative reuse has already been cropping up—it is Philadelphia, after all.