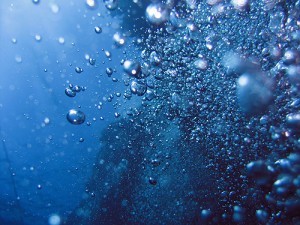 Among the best entries in our Philadelphia city form contest–city as Dantean hell, city as mirrored opposites, city as cheesesteak (3rd runner-up), city as hard drive–the most thoughtful metaphor came from reader Sarah Singer Quast. “Philly, and many cities for that matter,” she wrote, “remind me of a group of sea bubbles, neighborhoods that sit beside one another in random fashion. Well not entirely random, a strong neighborhood is likely to help support a strong neighborhood next to it–just as sea bubbles prop one another up.”

We liked her sea bubbles idea so much–and not just because we think global warming-related sea level rise is going to give Philadelphia an oceanfront–that she will receive a Hidden City Philadelphia membership and souvenir hardhat.

Quast’s idea is reminiscent of “cosmopolitan canopies,” a metaphor for social behavior in the city devised by legendary sociologist Elijah Anderson. Perhaps these two metaphors overlay.

Here’s what else Quast’s entry had to say:

It is these neighborhoods that serve as the centers of the city, they differ in size and shape. We have an area of Philadelphia that we call Center City, but those of us who live here actually think of several different bubbles that make up Center City–Old City, Midtown Village, Fitler’s Square, etc., and we could all probably identify a space that we think of as the center of those neighborhoods.

If you want to take the metaphor a little further, the fragility of the bubbles also is representative of neighborhoods in cities. External factors, particularly economic conditions, have the potential to burst these little bubbles. Without knowing the science behind it I even wonder if smaller sea bubbles are likely to pop before larger bubble–in other words, do well-established, stronger bubbles (neighborhoods) withstand external conditions more successfully?