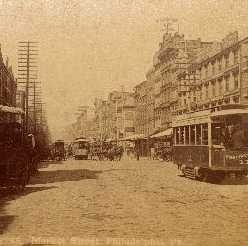 A cable car on Market Street.

Until 1893, streetcars in Philadelphia were powered by horses. That year, Philadelphia was one of the first cities in the country to abolish horse cars. This was done so quickly that the horses were completely banished by 1896. The city then became a pioneer in electric-car service.

But Eleazer A. Gardner of Philadelphia had patented plans for the first cable streetcar system almost 40 years before, in 1858. Gardner’s system was comprised of a series of pulleys and an underground tunnel between the tracks housing the cable. Gardner received his patent, number 19,736, on March 23, 1858. While it was not immediately put into operation in Philadelphia, this system for cable cars was employed in San Francisco beginning in 1873.

A decade later, Gardner’s system was finally installed in Philadelphia, making this the third city in the nation with cable cars.

Service began on April 7, 1883 on Columbia (now Cecil B. Moore) Avenue from 23rd Street to the east entrance of Fairmount Park. Designed to accommodate summer travel to the park, this line was managed by transit magnate Peter A. B. Widener through the Philadelphia Traction Company (previously called the Union Passenger Railway). Within a few years, the Fairmount Park line ran to 7th and Master Streets, and from there all the way to Locust Street (southbound on 7th and northbound on 9th).

Another cable car line started along Market Street on January 26, 1885. These trolleys ran from 41st Street and Haverford Avenue east to a trolley station and engine house on the south side of Market Street between 19th and 20th Streets. The line continued east from there to Delaware Avenue to serve the ferries at the foot of Market Street. The Market Street station also had a hydraulic elevator by which trolley cars were raised to the second and third floors of the building to allow them to be stored overnight. 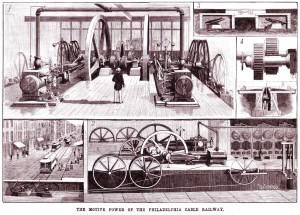 From "The Motive Power of the Philadelphia Cable Railway," February 21, 1885, issue of Scientific American.

The image shows the complicated engine set up at the Market Street Station. The cable lines were powered by two 260 horsepower steam engines, built by Robert Wetherill & Co. of Chester, Pennsylvania. The engine house’s cast iron flywheel was 18 feet in diameter and weighed 40,000 pounds.

The steel cables were one and a quarter inches in diameter and ran under Market Street in wrought iron cable conduits placed in the center of the trolley gauge. One cable moved at 7.2 miles an hour to Front Street and another at 9.1 miles an hour to 41st Street. Through trolleys would coast from one cable to the other at 20th Street to make the full run. A complex system of pulleys routed the cables across town; the cables actually crossed over each other several times along Market Street. The trolleys were moved by a jaw-like clutch that gripped the cable. 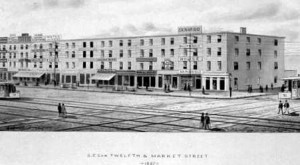 Both the Market Street and the Columbia Avenue cable car lines lasted for about ten years. They were not ultimately successful, in part because the weakly-built cable conduit squeezed shut when the ground froze. The Market Street line, in particular, was poorly designed, requiring four pull curves for each direction to get around City Hall. The cars jerked violently when they started out. Plus, the hatches for servicing pulleys were very thin and bent under traffic. And the cables wore out quickly too. Here’s how the Traction Company dealt with that problem (from American Railroad Journal (vol. 60, 1886), at 179-180):

The cable, after entering and before reaching the wheels turned by the engine, passes through a hole in a suspended iron bar. The hole is big enough for the cable to pass without striking, but as soon as the projecting end of a broken strand comes along, it strikes the bar and rings a bell. Then the engines are stopped, all the cars on Market street stand still and several hundred passengers fume at the delay, and a man in the engine house goes to work to remedy the trouble. This is done by cutting off the ends of the broken strand and tucking them snugly into the inside of the rope. This process occupies about 15 minutes; sometimes more, sometimes less.

By 1895, all cable car routes were converted to electric trolley car service. Today, there is no trace of either the Columbia Avenue or the Market Street line.