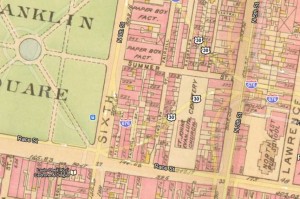 Saint John’s Lutheran Church was the oldest English Lutheran Church in the world when it was demolished to make way for the Philadelphia approach and plaza of the Delaware River (Benjamin Franklin) Bridge. The Bridge Commission ordered the church property condemned in July, 1924 after a lengthy court battle, which the congregation lost. Remains and monuments in the burial ground were moved to Laurel Hill Cemetery; a tiny plaque along Race Street is all that honors this history.

In fact, all surrounding structures in that Franklin Square area were torn down for the bridge, including a cluster of narrow streets and tiny homes that Bulletin columnist Christopher Morley had admired only a few years before. Today, driving onto the Ben Franklin Bridge or dashing across Sixth Street, perhaps to stand at the base of Isamu Noguchi’s “Bolt of Lightning,” one hasn’t any inkling of the neighborhood that drew Morley’s attention.

“The little burying ground behind St. John’s is one of the most fascinating spots in Philadelphia,” he wrote in 1919.

I found George Hahn, the good-natured sexton, cutting the grass, and he took me round to look at many of the old tombstones, now mostly unreadable. Several Revolutionary veterans came to their resting in that little acre..If I were an artist I should love to picture the quaint huddle of tawny red brick overlooking St. John’s churchyard, the vistas of narrow little streets, the corners and angles of old houses. The sunny walls of the burying ground are a favorite basking place for cats of all hues—yellow, black and gray. I envy George Hahn his quiet hours of work in that silent inclosure, but he assured me that the grass is rank and grows with dreadful speed. The somewhat desolate and forgotten air of the graveyard, with its broken stones and splintered trees, adds greatly to the wistfulness of its charm.

Behind the churchyard is a kind of enchanted village. Summer street bounds the cemetery, and from this branch off picturesque little lanes—Randolph street, for instance, with its row of trim little red houses, the white and green shutters, the narrow cobbled footway…Parallel with Randolph street run Fairhill and Reese—tiny little byways, but a kind of miniature picture of the older Philadelphia. Snowy clothes were fluttering from the lines and pumps gushing a silver stream into washtubs. Strong white arms were sluicing and lathering the clothes, sousing them in the bluing-tinted water. Everywhere children were playing merrily in the overflow. And there were window-boxes with bright flowers.

Saint John’s Evangelical Lutheran Church was organized in 1806 in response to pressure from Philadelphia Lutherans to have sermons delivered in English rather than German. General John Peter Gabriel Muhlenberg, famed Revolutionary War hero, led some 3,000 members out of the German-speaking St. Michael’s-Zion Church, so that they could proclaim the Gospel in the new language of the people. 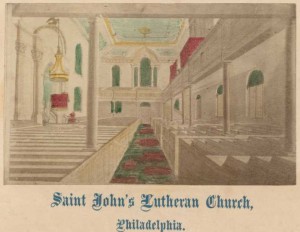 The church–with seating for 1,300 plus–was built in 1809 on the north side of Race Street below Sixth Street, and indeed, it was the first English Lutheran church in the United States and was one of the handsomest examples of Federal-style architecture in the nation. Designed by Frederick Graff (of Water Works fame), it included a large eagle (symbolizing St. John the Evangelist) carved in pine by sculptor William Rush. The front portal of St. John’s was called the finest in the city, and may still exist at the Philadelphia Museum of Art. The church cemetery eventually extended halfway to Vine Street.

Saint John’s first preacher, Philip F. Mayer (1781-1858), remained pastor for an astonishing 52 years. He was a founder, with Bishop William White, of the Pennsylvania Bible Society, and a trustee of the University of Pennsylvania. 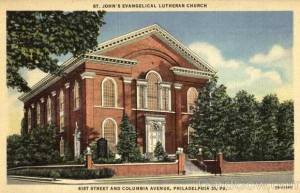 Postcard of the replica of St. John’s Lutheran Church, c. 1929, in Overbrook.

After demolition of St. Johns, the congregation moved to Overbrook, merged with a mission congregation, and, in 1928-29, erected a replica of the Graf’s original 6th Street building using much of the earlier structure’s material. In the 1960s, the congregation lost ground as the neighborhood changed; its final service was on February 4, 2001. The building, now used by the Freedom Christian Bible Fellowship Church, still handsomely stands as a facsimile of an earlier time and a very different place.