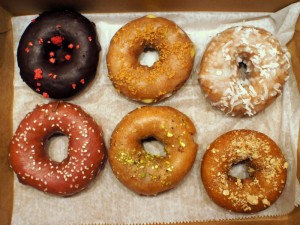 A few weeks ago, I sat down with Meryl Levitz, president and CEO of the Greater Philadelphia Tourism Marketing Corporation (GPTMC), and GPTMC’s vice president for communications, Jeff Guaracino. Levitz, from Chicago, was GPTMC’s founding president and CEO, and before that she led the Convention and Visitors Bureau, which opened the Pennsylvania Convention Center in 1993.

NP: What’s the latest thing for the Philly traveler?
ML: People are eating their way through the city. Along with eating goes beer and drinking and along with drinking goes nightlife, something we weren’t known for before: fun. So food changes everything.

NP: And this week Travel and Leisure readers ranked Philly first for culture.
ML: Well, with the Barnes Foundation opening, and with expansion of the Philadelphia Museum of Art, and PAFA’s new campus space, we envision a visual art and food empire. This is a huge opportunity for the city itself to be interpreted in a different way.

NP: So people are experiencing the city differently than they used to?
ML: At some point the semiotics of the city were you’re on your own to find your way, and this was true for the resident and for the visitor. Now, we’re learning how to signpost. We’re friendlier and we’ve chosen to invest in ways that the city is now understood as being accessible. A seminal moment was in 1995, when Mayor Rendell signed the sidewalk cafe ordinance and that helped just open up the city. The other big thing is that we’re showing an interest in making public space–big public spaces. For tourists Franklin Square is an example. But all over we’re showing we’re interested in people to get together. This is no lo longer a city anymore of private clubs.

NP: The city experienced by the traveler also feels larger.
ML: What our visitors tell us is that they were surprised. So they book another trip in order to see more. The dimensions of the city are actually expanding in terms of where the tourist wants to be. And because of food, for example, you’re going to have tourists finding their way to Second and Federal because of Federal Donuts. That’s a terrific change.

NP: With the recent announcement of the Museum of the American Revolution, is there any worry over the economics of Philadelphia cultural institutions. Can people afford all those tickets?
ML: First of all, the Museum is one of these missing pieces, a blank space in the story we’re able to tell. The renovation of the Franklin Court Museum in 2013 is another good addition. Having another pay museum is not a concern for us. Having more attractions that require tickets helps build up a level of expectation that in order to see our treasures you’re going to have to pay something. What’s hurting is that people are so conditioned to everything down there [on Independence Mall] being free. To be the only fee-based ticket, as the National Museum of American Jewish History is, in the midst of free is difficult position. We’re still considered a bargain compared to New York, Washington, and Boston. It’s easy to get here, it’s very well positioned, and a ticket for an attraction here is still well-priced at $15–Philly is still considered to be a bargain.
JG: But Third and Chestnut is not a great location. We’re hoping that with the Jewish Museum, the Museum of the American Revolution, and the Franklin Museum, we’ll create a critical mass in that part of Historic Philadelphia. You need the density.
ML: Years ago the Cultural Alliance did an assessment of the attractions in Historic Philadelphia. It said that if you’re a tourist and you want to follow the story line of the American Revolution, what you get is a bunch of branch offices, but no headquarters, and that’s what the new Museum will be. We’re thrilled, we need a place to connect the dots.

NP: But you can’t just expect to open a museum and imagine they will come.
ML: Nope, it’s not so easy. What Bill Rouse taught me when we were opening the Convention Center was that you have to build it, sell the hell out of it, and then maybe they will come.