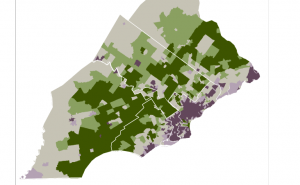 Only 44 percent of Americans live in middle income neighborhoods, down from 65 percent in 1970, according to the New York Times. And the percentage of Americans living in either very poor or very rich neighborhoods has doubled to 30 percent. Philadelphia–and its four PA suburban county cousins–is the Times’ prime example in a map graph story story HERE.