When We Were Ready 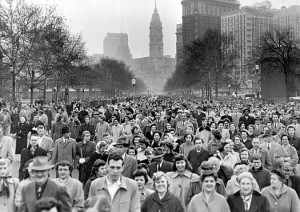 Thousands of workers stream down Benjamin Franklin Parkway after evacuating their offices following a mock atomic attack in Philadelphia, November 23, 1954. Notice all the smiling faces in light of this simulated disaster or disaster to be.

“Operation Scram” was the code name for the country’s first civil defense evacuation drill in a large American city, which took place in Philadelphia on the morning of November 23, 1954. It occurred at the height of the last era in which emergency preparedness—in the form of early cold war civil defense—stood at the forefront of the city’s challenges.

The prearranged drill was a simulated response to a Soviet nuclear attack on Center City. Led by Mayor Joseph Clark, some 25,000 municipal employees, office and factory workers and residents in the area between Broad and 17th and Race and Market Streets were roused by civil defense sirens. They walked from City Hall up the Benjamin Franklin Parkway to the designated assembly area at 21st Street, a quarter mile away. From there, in a real emergency, they would board transport out of the city. The participation rate was about 98 percent. 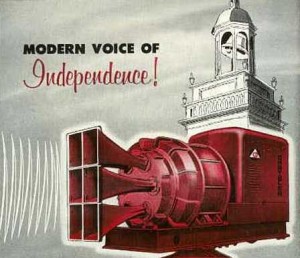 From an ad for a Chrysler Air Raid Siren, Industrial Engine Division, Chrysler Corporation, appearing in The American City Magazine, September 1952. Yes, that's supposedly Independence Hall (and allegedly, according to the ad, the Liberty Bell).

Op Scram was studied in order to investigate the hypothesis that non-designated leaders (so-called “gatekeepers”) who normally exercise some control over the movements of other people, will take a leadership role in the mock disaster situation. The results suggested a basis for tentative acceptance of this hypothesis.

Everyone agreed that the mass evacuation was a great success. Jubilant officials hailed the test and the assistant administrator of the Federal Civil Defense Administration in Washington said Philadelphia’s operation was “the most encouraging thing I’ve seen in five years of doing a difficult and frustrating job.” Mayor Clark gushed: “The exercise shows that evacuation here in Philadelphia is a practical possibility which ultimately may mean the saving of hundreds of thousands of lives.” Newspaper accounts proclaimed that Operation Scram “couldn’t have worked better even under actual attack conditions.” 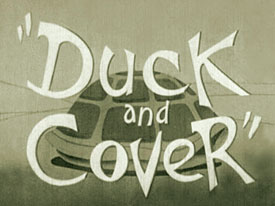 Right… As the 1950s proceeded, the futility of such exercises gradually became apparent. Civil defense failed in Philadelphia, as it did across the nation. Perhaps this comment by the then-director of the Pennsylvania Civil Defense says it best: “In the State of Pennsylvania, we still haven’t been able to teach ten million citizens the difference between the alert and all-clear.”