Editor’s Note: If Mayor Nutter has his way Occupy Philly’s tent city will soon be gone from Dilworth Plaza. Before it shares the fate of the encampment at New York City’s Zucotti Park though, let’s take a look at the urban landscape–the “city” of tents–created by protestors over the past six weeks. This is an amalgamation of the first two parts of the “Occupy Philly as Spontaneous Urbanism” series on Crossing the Lines, see HERE and HERE. Any further contributions to this series will likewise be cross-posted.

Occupy’s tent city can be described as “emergent” because it is assembled from a fairly standard collection of individual units (tents), combined together in a highly complex and nonstandard order. It has both the virtues of high interconnectivity and quiet streets, achieved through a natural dual-level street hierarchy. The primary streets are, however, curved slightly and bend along City Hall’s façade: the only perfectly straight road is the one between Market Street and City Hall’s portal, currently being used as an amphitheater for voicing grievances.

These pictures were taken during the second week of the occupation. 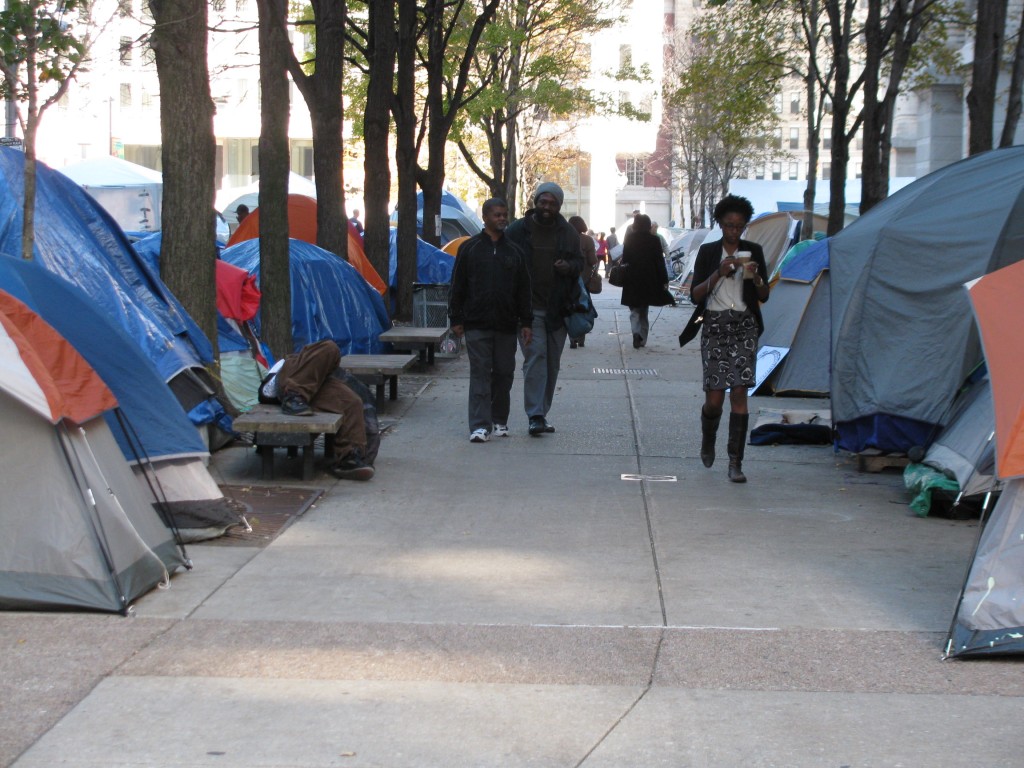 Primary north-south avenue through Occupy Philly. This Baroque way seems to have come about through campsite reorganization. 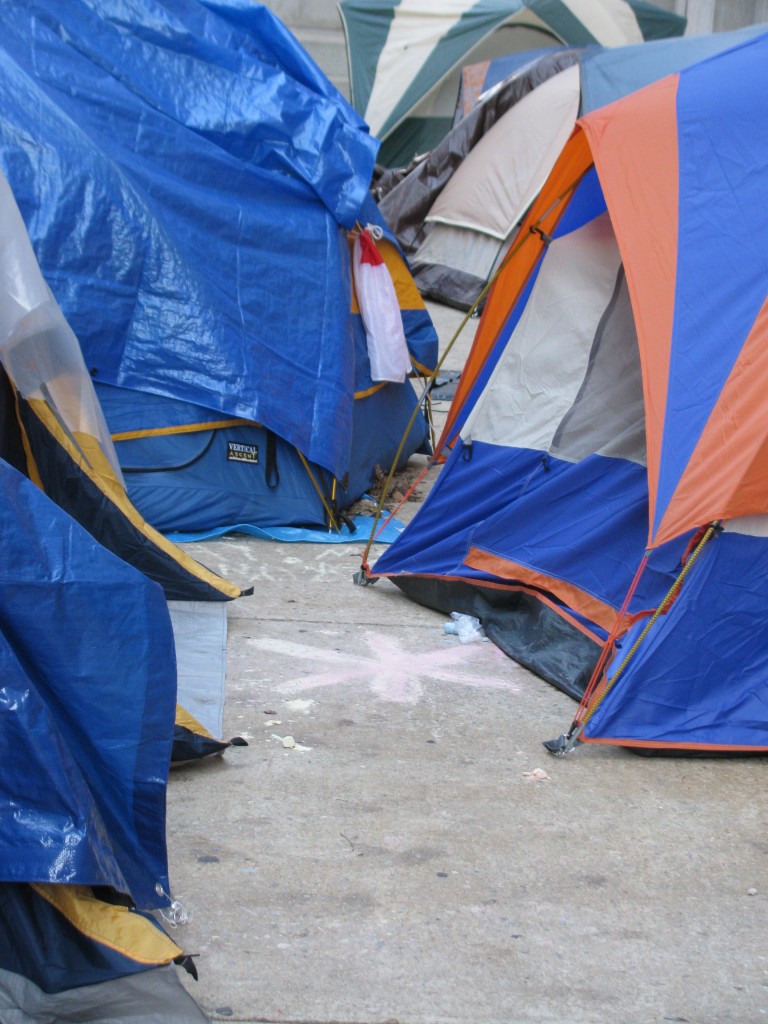 A back street in Occupy Philly. 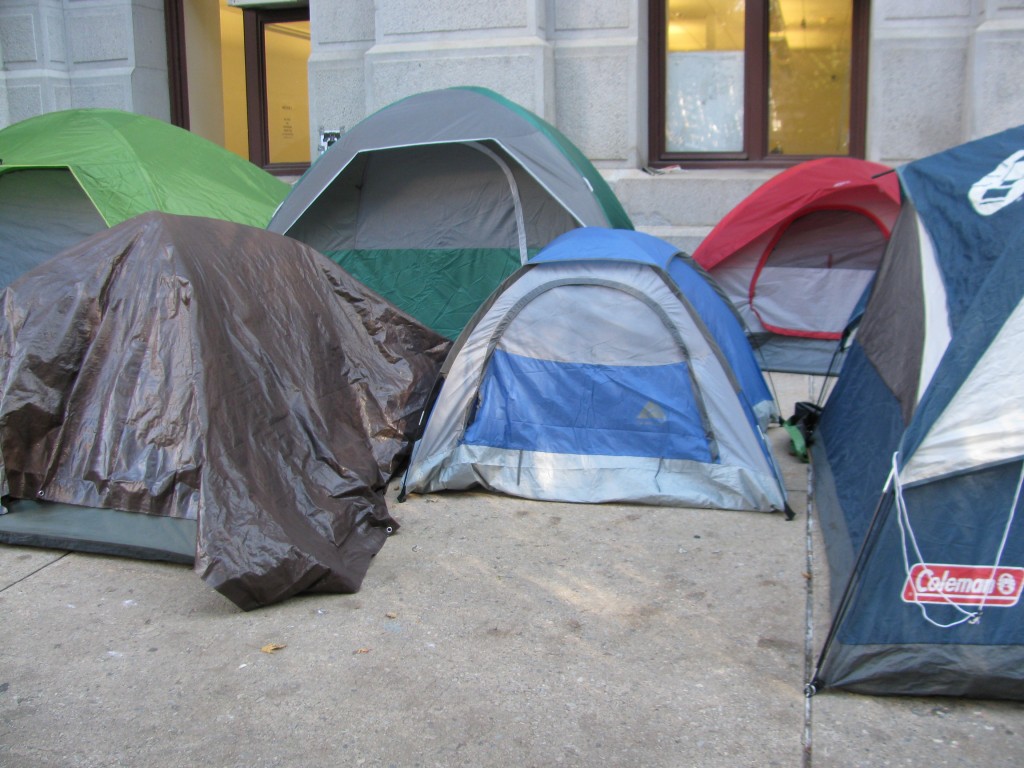 Packed in tight, but with variation. Here we see how the structural variety and footprint uniformity create emergent urban form–even in a tent city. 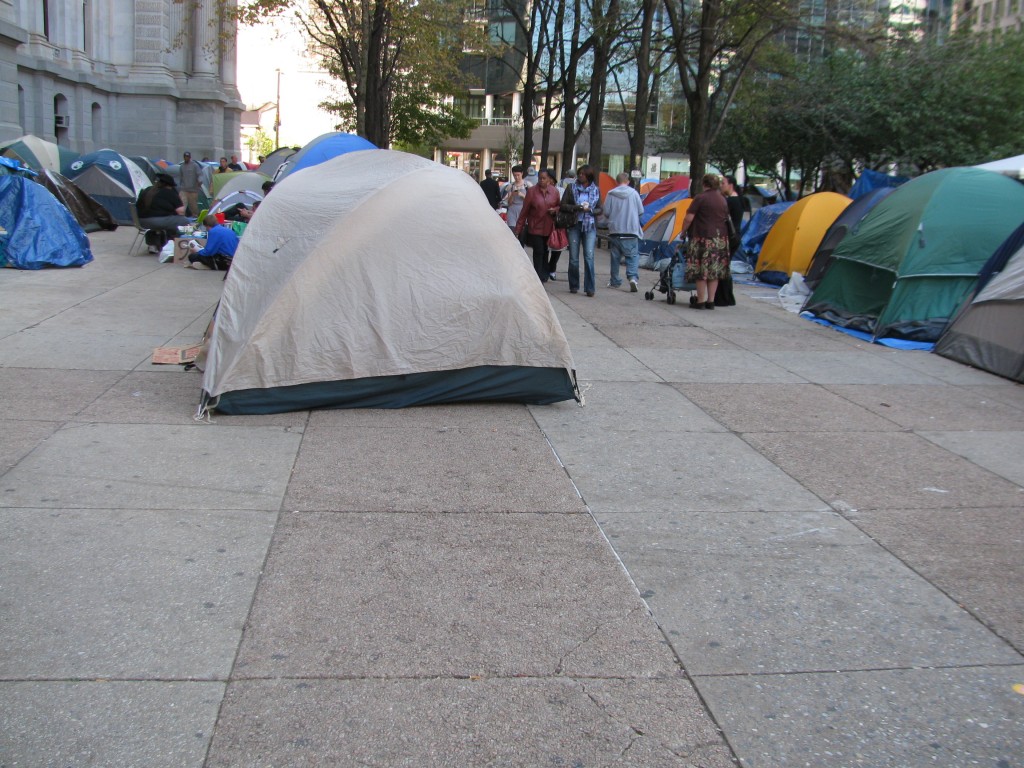 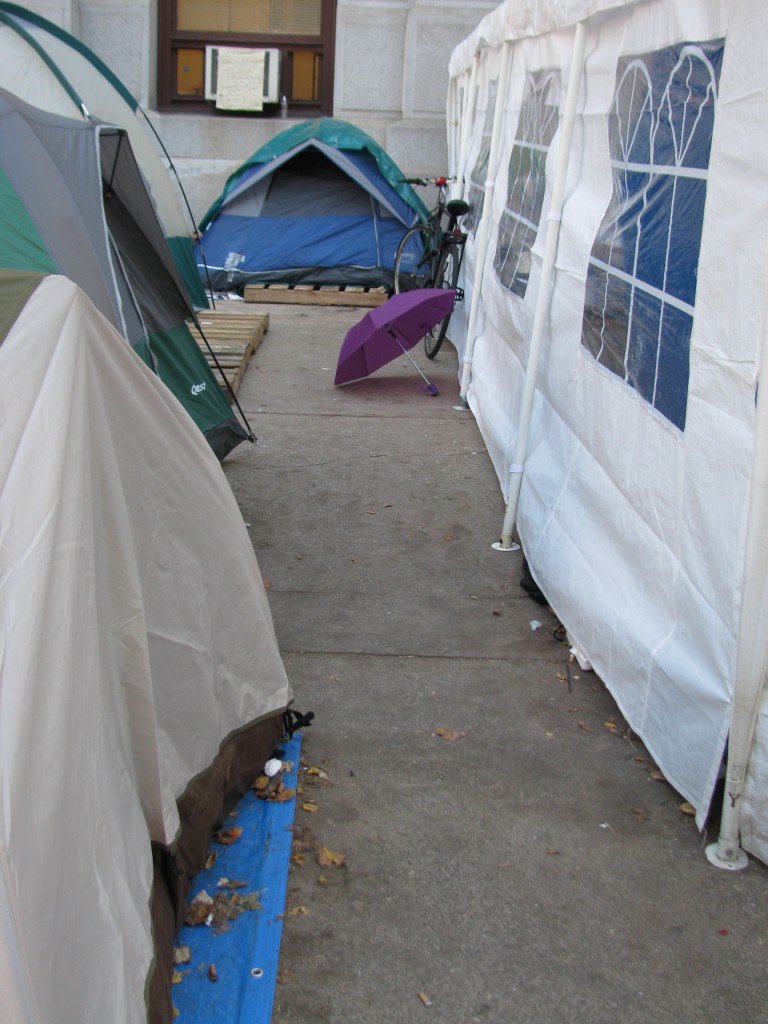 Back street. To the right is the tech tent. 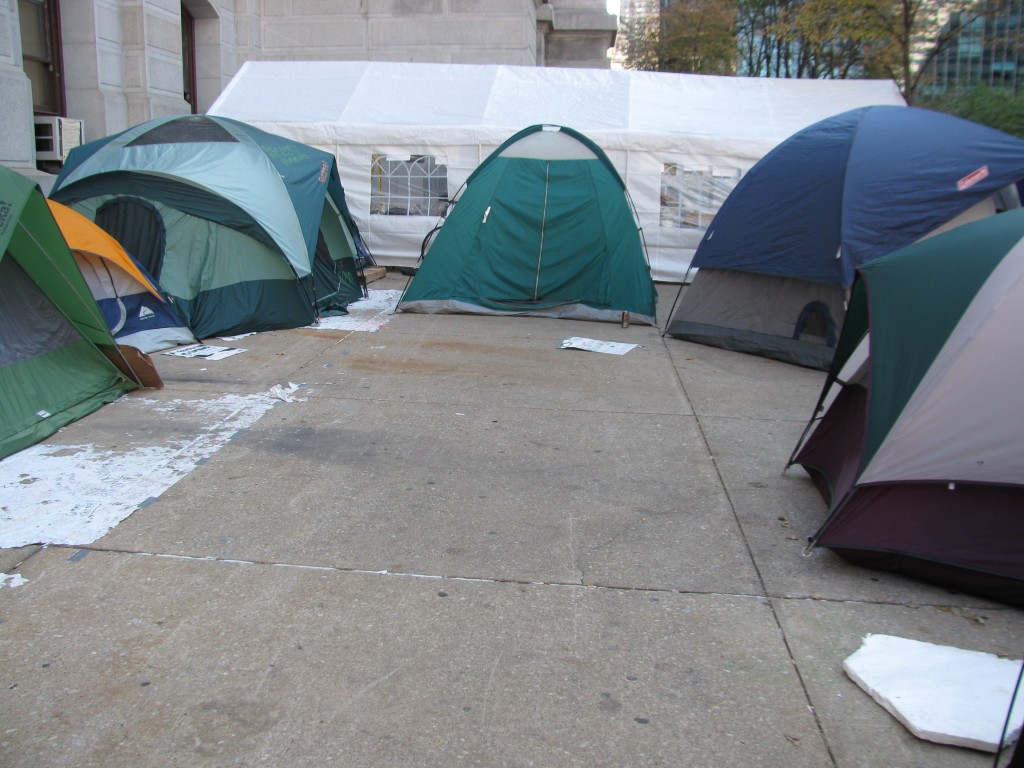 This court is a remnant of a previous major artery through this burg. The tech tent, in the background, when erected blocked the through street off and forced the Baroque boulevard to be driven through. 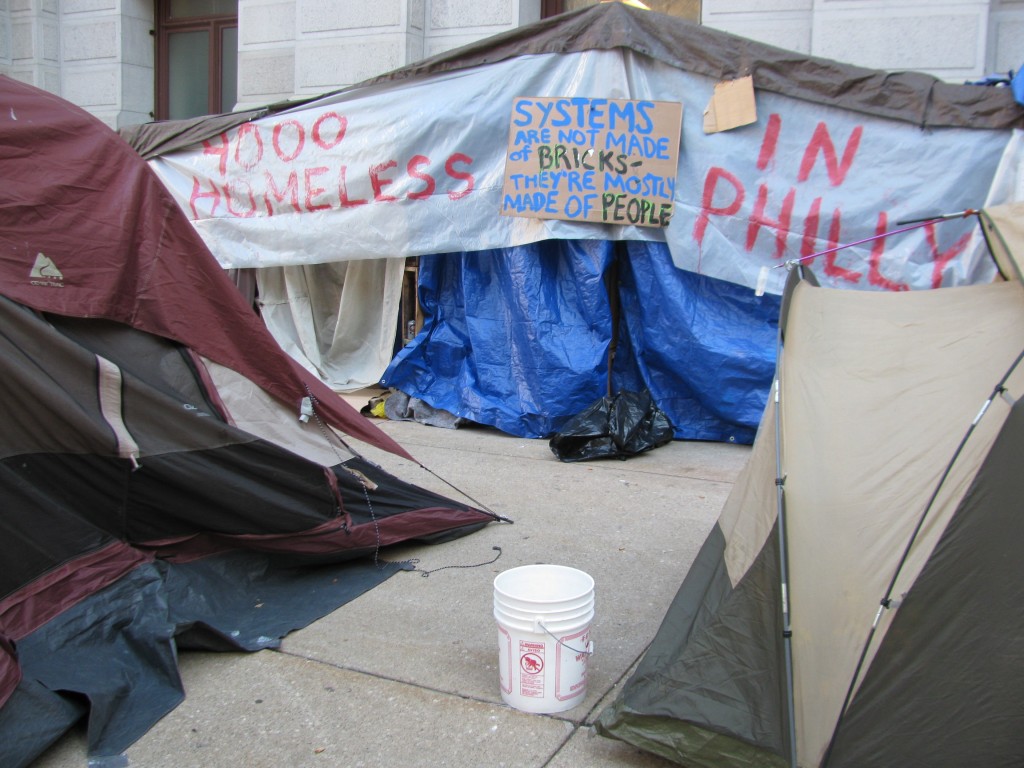 No longer is the homeless tent on the main road. 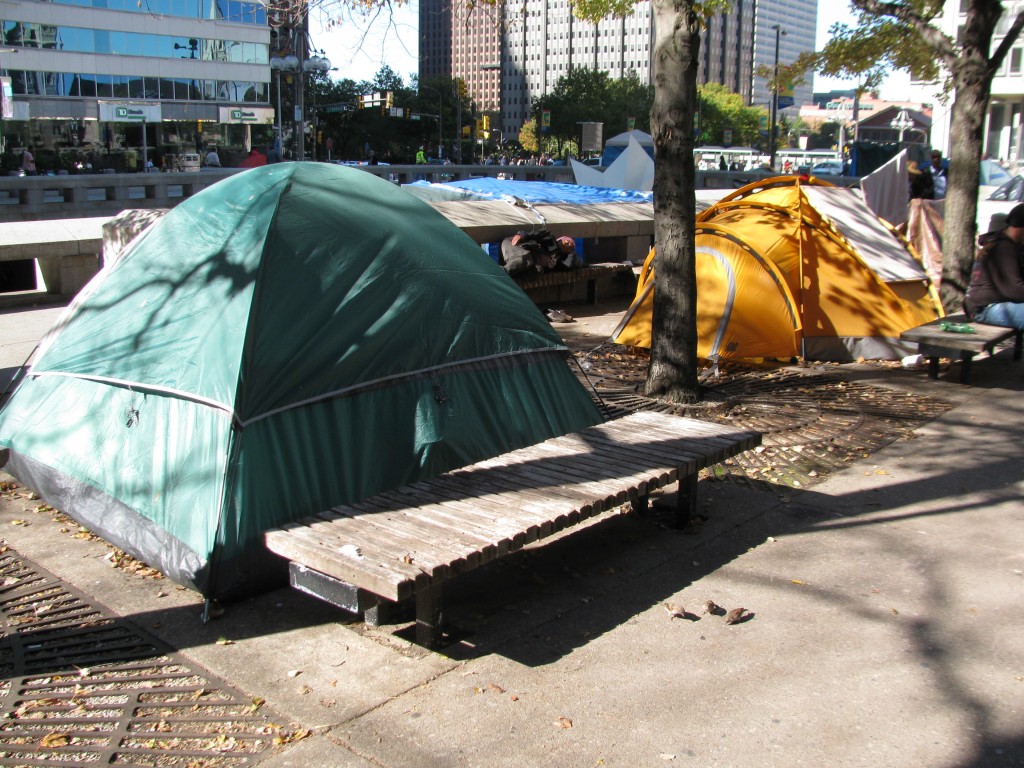 On the north side of town, space between dwellings grows. Urbanization eats this space away, though. 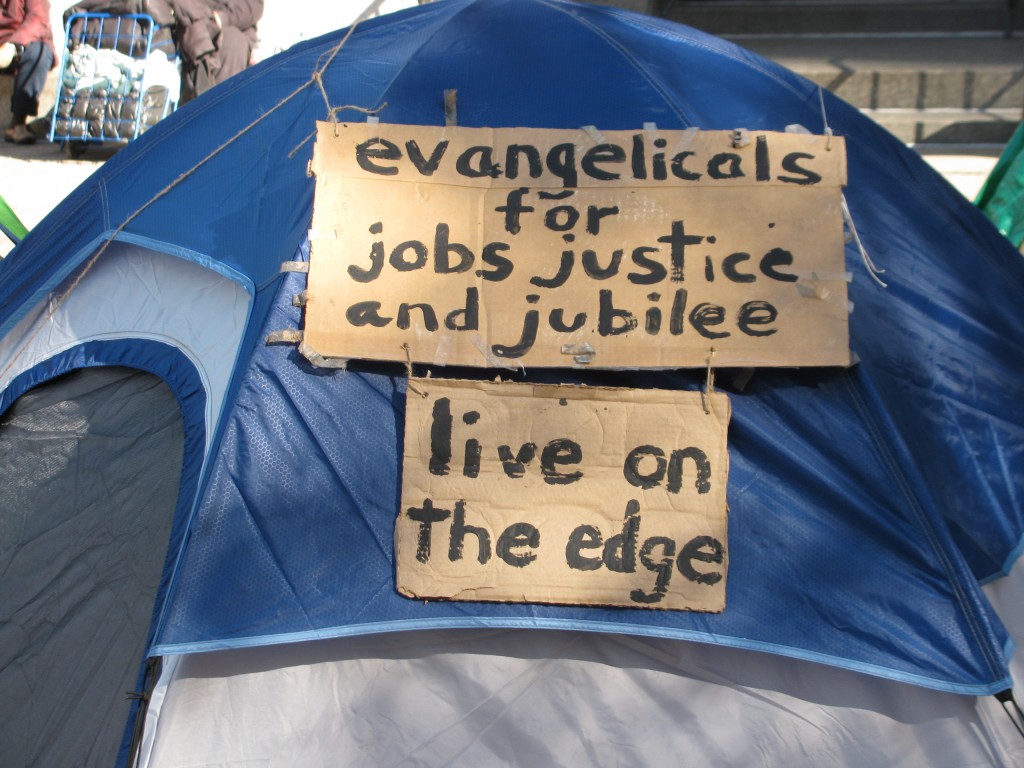 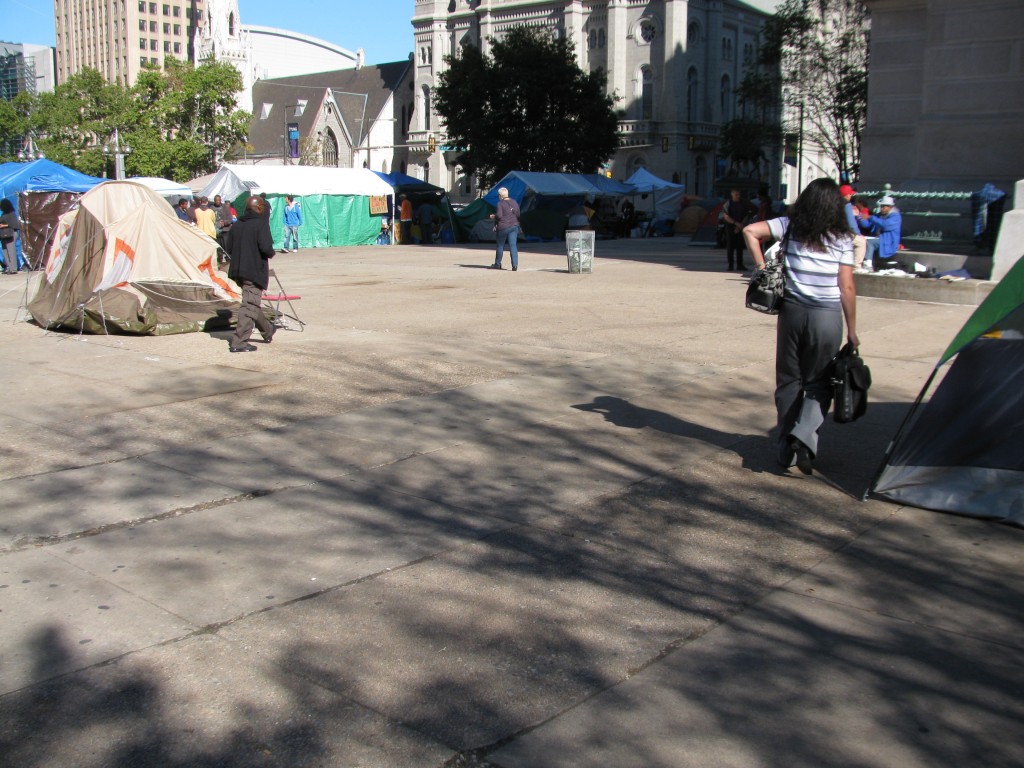 The north plaza, a huge unurbanized space at the north edge of the encampment. 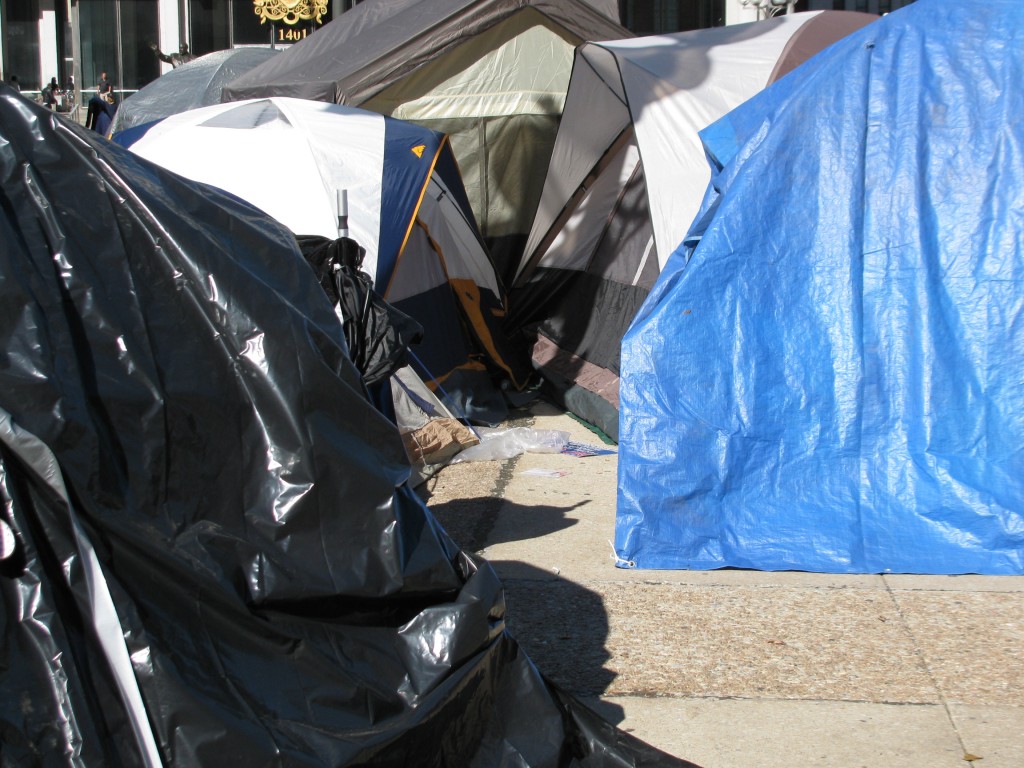 Heavy-duty urbanization along alleys behind buildings facing the north plaza. 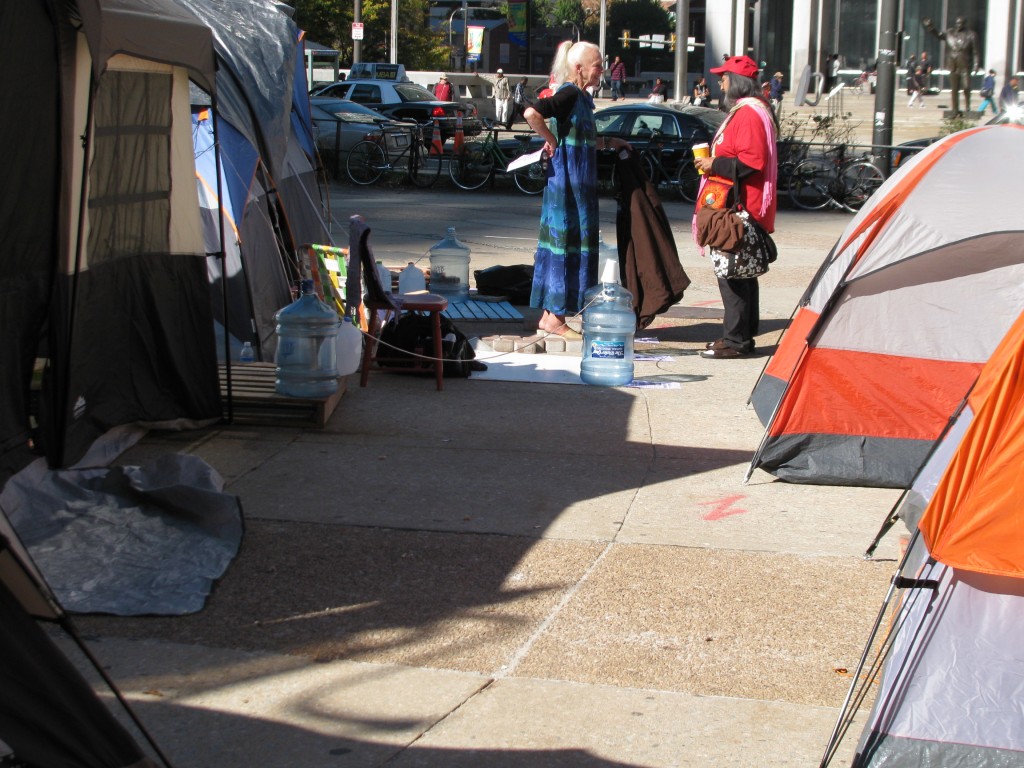 Some tents, such as this, even have claimed “yard” territory. 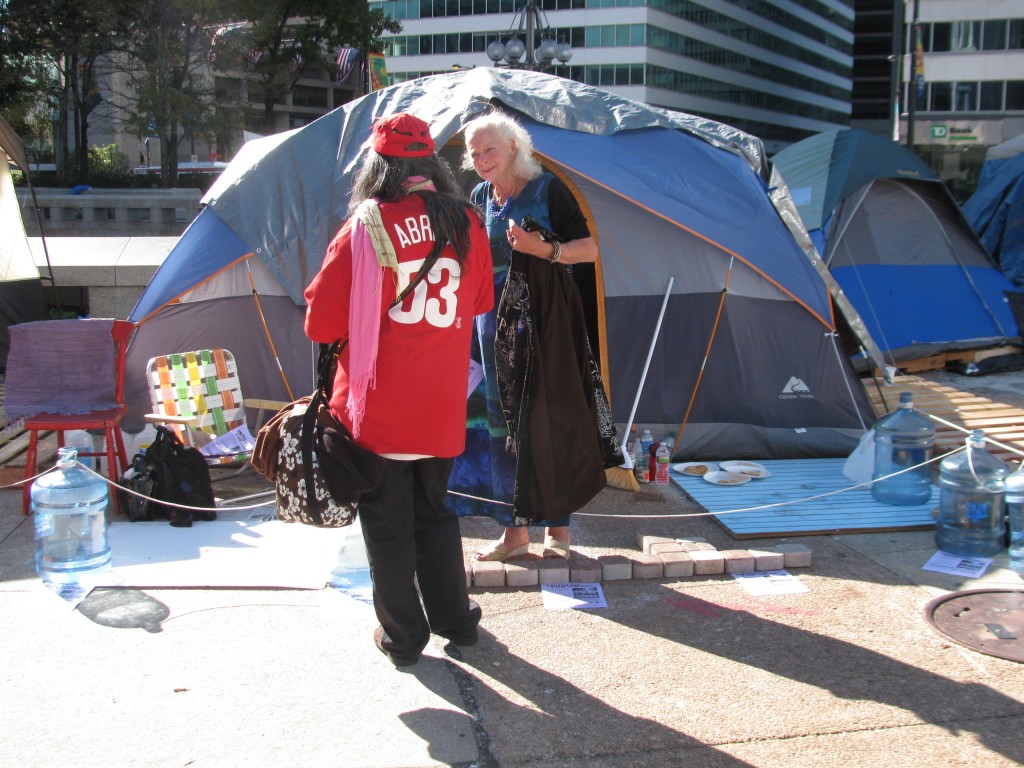 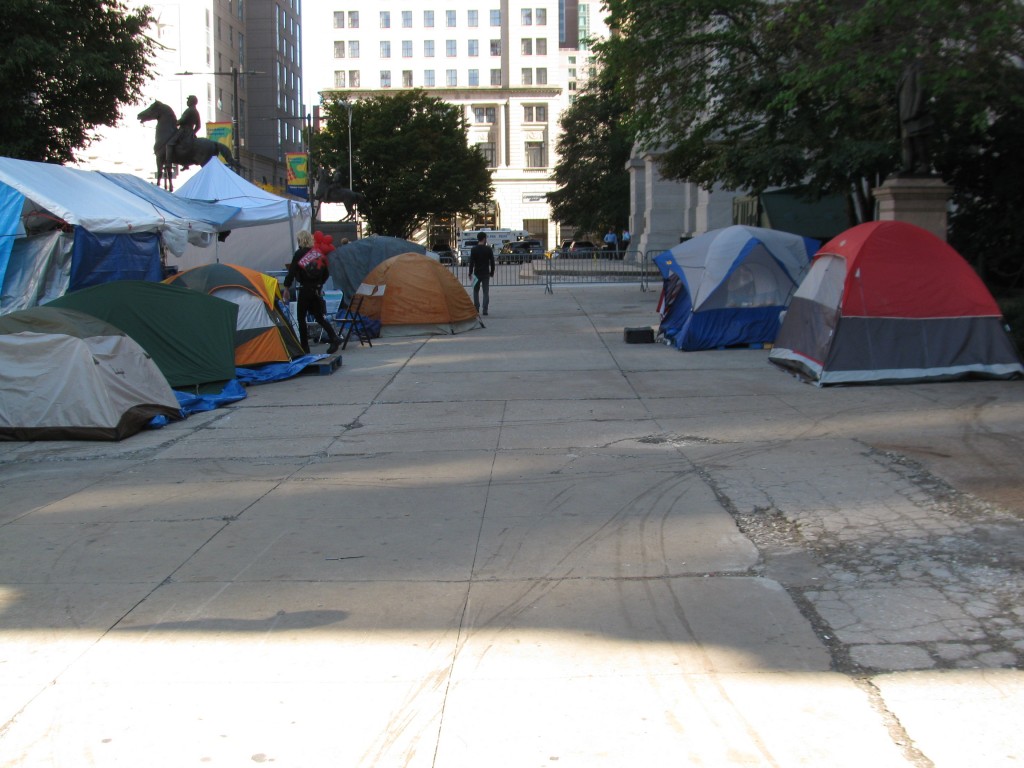 This wide avenue branches off the north plaza and is a sleepy village in comparison with the concentrated downtown area along the Market Street axis. 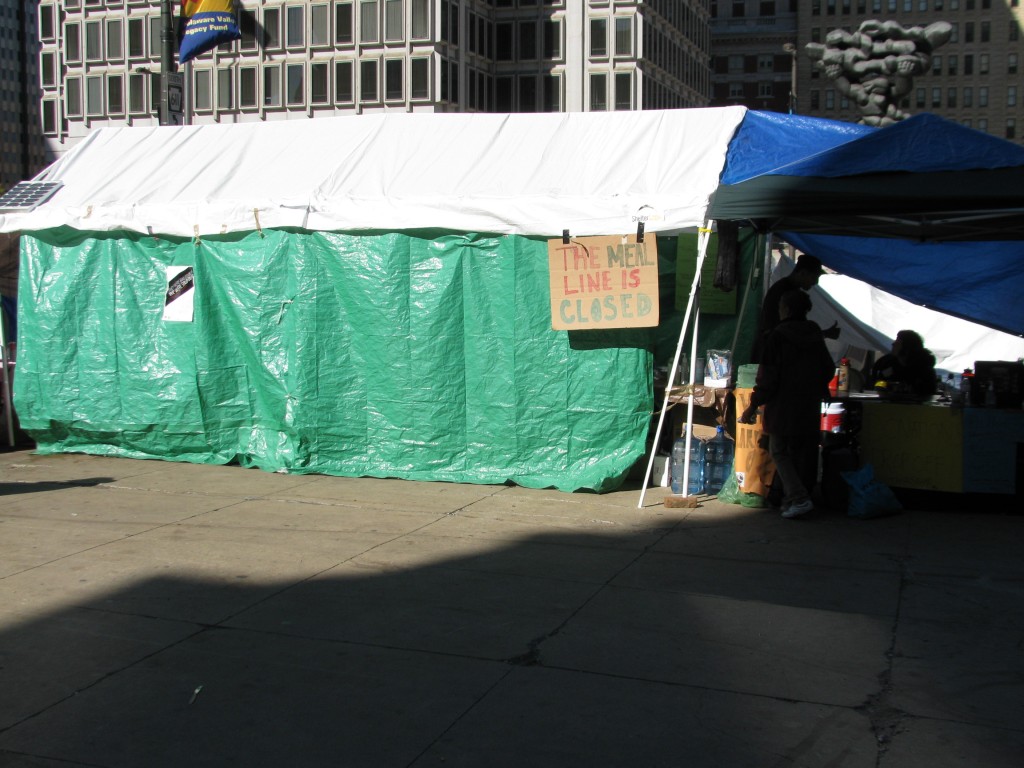 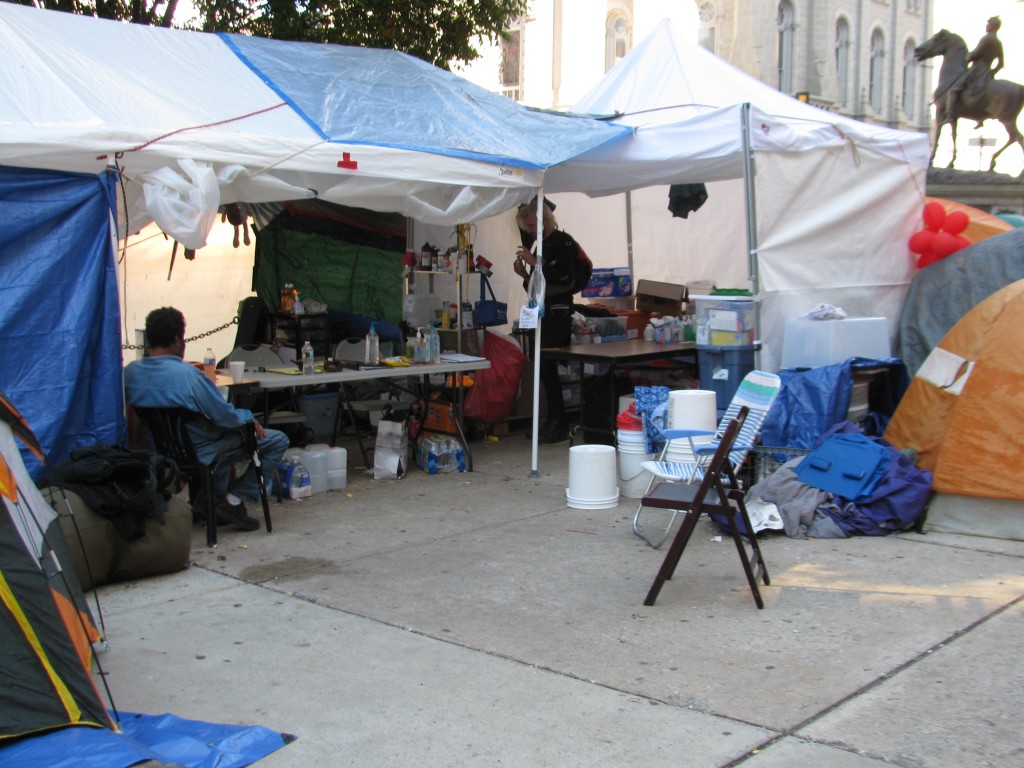 Higher-use tents nestled in a suburban downtown on the north side. 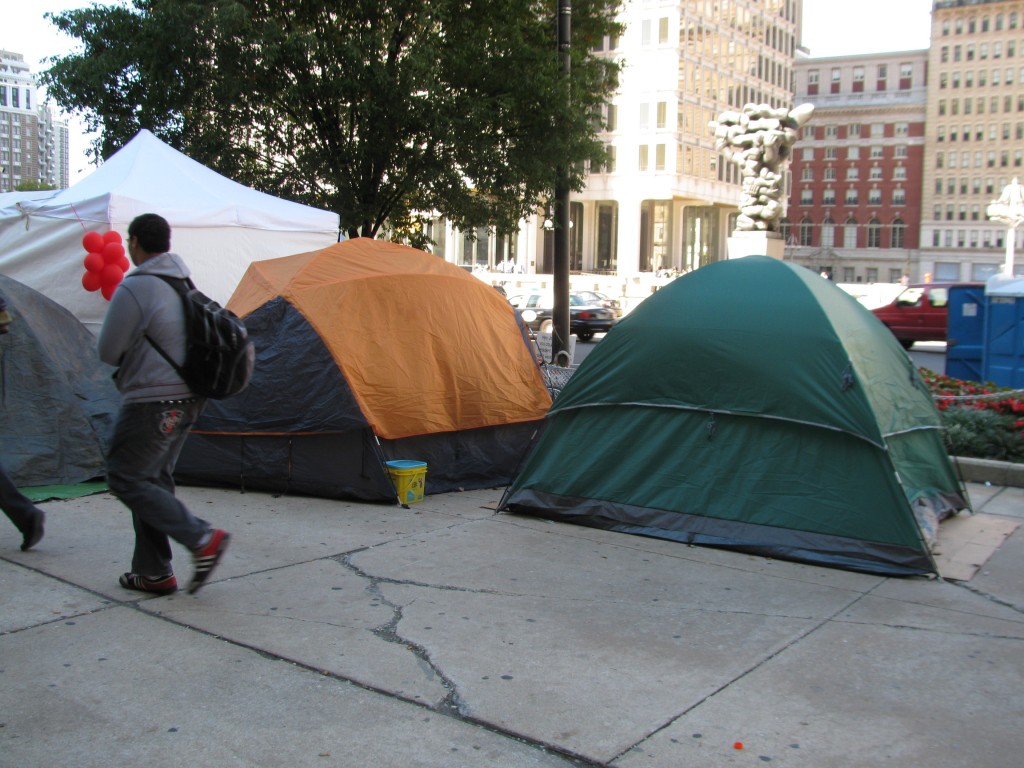 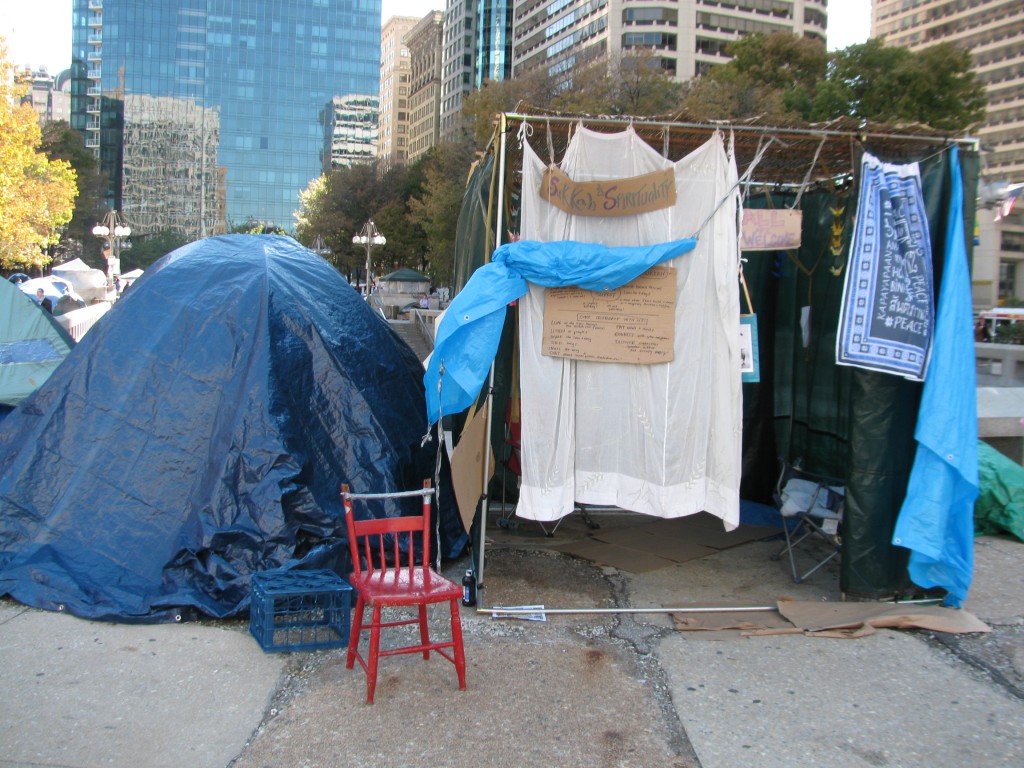 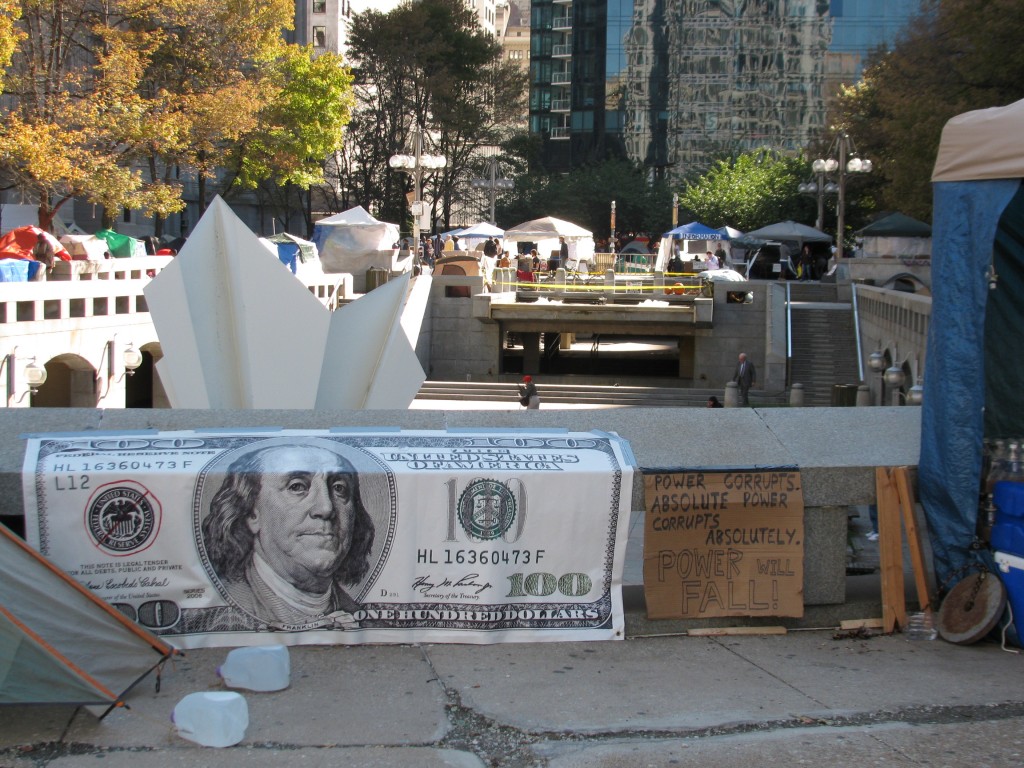 Dilworth Plaza’s great sunken area has not been filled in by tents, despite its bordering downtown. It is as much a barrier as a lake or fen, and is clearly separating the central urban area from the north side.