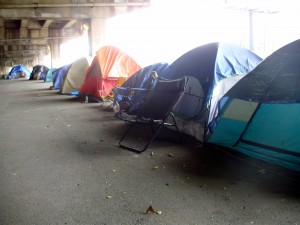 Early this morning, a self-identified homeless community of 33 people erected 20 tents under I-95 between Cumberland and Sergeant Streets. Evicted from Occupy Philly (OP) in Dilworth Plaza, a representative from the advocacy group HAVOC transported the group to their current location.

Neighbors living on Salmon Street in a row of houses facing the encampment are worried about possible drug use and unsanitary conditions. However, from the author’s observation, tents were in neat rows with leaves and trash swept clean. A red tent lay on top of a sewage drain to act as an emergency bathroom if people could not walk to a store in time. Individuals spoke clearly and were concerned about the community’s issues. There was no sign of drug use.

Various organizations and individuals are supporting campers with food, quarters for laundry, and other essential items–people from the OP Interfaith Tent in particular. We’re here to help them,” said an OP organizer. “They are citizens, too.” 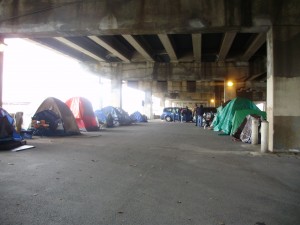 Nine of the original 33 homeless people accepted help from local shelters and the Department of Behavioral Health. The remaining 24 people did not accept assistance and decided to stay. Project Home outreach coordinators visit 2-3 times per day, but say that it’s ultimately up to the individual to relocate and take shelter. This is a recurring problem with Philadelphia’s homeless population.  The Inquirer recently covered this issue in Center City. Read the article HERE.

Police will be stationed at the underpass from 7AM but will leave by 8PM. When asked what statement they hoped to make from their occupation, one homeless man responded “we make no statement, no political statement” and clarified that his community is not part of OP, but simply supported by them. “Occupy was a family to us. We’re a family to each other.”

While this homeless community has made it clear they are not part of OP, they are, nonetheless, occupying a space under I-95. What does it mean if this occupation is no more than a homeless encampment?