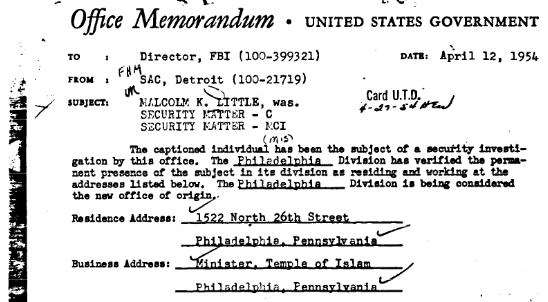 Quite a few famous people have lived in Philadelphia, and we generally like to brag about it. If the person is deemed important enough, the State of Pennsylvania puts up a dark blue historical marker on the spot as a stamp of official recognition. There are lacunae in our collective memory, though, and Malcolm X’s brief residence in Philadelphia is one of them.

Malcolm moved to Philadelphia in early March of 1954, fresh off his success organizing Temple 11 in Boston. His brief was to energize Temple 12, located at 1643 North Bailey Street, now home to the Holy Ghost Crusade Church. The FBI already had Malcolm under surveillance, and noted his arrival in Philadelphia. One file states that he quickly registered as a longshoreman on the waterfront.

Malcolm shared a rented flat at 1522 North 26th Street with Joseph X Gravitt, according to these FBI documents and Manning Marable’s recent biography Malcolm X: A Life of Reinvention. However Sean Patrick Griffin says Malcolm lived a few blocks away at 2516 West Nicholas Street in Black Brothers Inc., his account of Philadelphia’s Black Mafia. The 26th Street building has been demolished, but the Nicholas Street house still stands.

The Nation of Islam dispatched Malcolm to turn around New York City’s Temple 7 in June of 1954, but he remained minister of Temple 12 for another three months. He would return frequently to Philadelphia in the coming years, and made his final appearance on a public stage with Elijah Muhammed at a rally here in 1963.

Malcolm’s stay in Philadelphia was short and lacked drama, which is probably a good part of why it remains little known here. But then the general public tends to take pride in less politically divisive figures–witness the dearth of tributes to Thomas Paine in Philadelphia, which was so memorably hammered home by the late Steven Wells in Philly Weekly. This ambivalence may be on its last legs, though. Malcolm’s reputation has risen spectacularly since his murder, and it is now politically acceptable to name public facilities after him, at least in some parts of the country. Black Oak Park in West Philadelphia was renamed after Malcolm 1995, and he’s depicted in a 2005 mural at Ridge Avenue and West Susquehanna Street. Perhaps it’s time to recognize him more specifically as an actor in the story of our city.