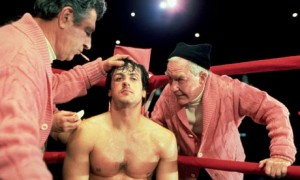 With New Kensington CDC and other community partners exploring ways to reverse the overwhelming decline of the neighborhood around Rocky Balboa’s fictional house on Tusculum Street under the El, the Rock is apparently making another comeback.

Sylvester Stallone and two Ukrainian producers–who were inspired to learn boxing by Rocky–will stage a theatrical version of the epic Philadelphia story in Hamburg, Germany. (Read Peter Binzen’s White Town and Matthew Countryman’s Up South and watch the original “Rocky” again. It stands up as a testament to the most difficult decade in this city’s history.) The script for the musical, naturally, is in German (though it’s unclear if “Eye of the Tiger” will become “Auge des Tigers”).

Says Stallone, of the opportunity, “At the end of the day, Rocky is a love story and he could never have reached the final bell without Adrian. To see this story coming to life on a musical stage makes me proud. And it would make Rocky proud.”