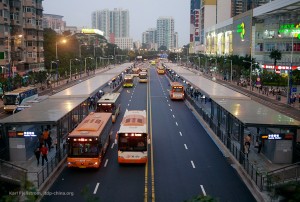 Bus Rapid Transit (BRT)–a huge success in Bogata, Colombia and Guangzhou, China–is under consideration for the Roosevelt Boulevard, as a way to connect the El and the Broad Street Subway, according to deputy mayor for transit Rina Cutler.

BRT applies subway and light rail passenger infrastructure–pre-paid fares, turnstiles, dedicated lanes, constant service–to the bus system at a fraction of the cost of new subway lines. Former Bogota Mayor Enrique Peñalosa notes in the film “Urbanized” that for the same cost of a 25 KM subway line, a city can add 400 KM of BRT.

For a city such as ours whose transit riders overwhelmingly are bus users, it’s worth watching this film, on BRT in Guangzhou. Note how wide roadways, like the Roosevelt Boulevard, are transformed–and the positive impact on pedestrian safety. Also note how BRT spurred advances in bike and pedestrian infrastructure and how attitudes toward bus transit have shifted.