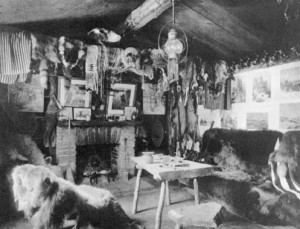 In the years after the Civil War, Michael Lewis tells us in Architecture and the Violent Mind, Frank Furness spent his summers in the Rocky Mountains. Later, too busy for cavorting but still in love with the west, Furness built himself a mancave, complete with pelts, western scenes, a ram’s head, rustic furniture, rough wooden beams and floor, Indian relics, etc., and here he entertained guests–including Walt Whitman–smoked, and dreamed.

He never rid himself of the west–but then he wasn’t alone among Philadelphians. Looking west was old sport for Philadelphia artists, who discovered sometime early in the 19th century that true American culture wouldn’t emerge in copying European masters but in the wild nature of the continent. Men like Charles Bird King, only a Philadelphian for a short time, became obsessed with Indians (they had scalped his father during the War for Independence). John James Audubon quit the scene here and headed west in 1812 or so, and never returned. Titian Ramsay Peale II quit the home of overbearing dad Charles Willson and got himself on as many western expeditions as naturalist artist as he could. 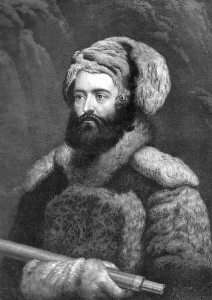 A little later came Elisha Kent Kane, who died the most famous man in America. A sickly child who overcame everything by exploring the globe. The west wasn’t enough for Kane, who hit the arctic. His Arctic Explorations sold 150,000 copies in 1853. The bad climate killed him at 37. His funeral train stopped in New Orleans, Cincinnati, Baltimore, where thousands of people—elite, working class, women, children—lined the street. It ended in Philadelphia. A building on Chestnut Street displayed a banner, “Philadelphia mourns an illustrious son, and the world a martyr to science and humanity.” Another: “Science weeps, Humanity Weeps, the World Weeps.”

Then there was Owen Wister, who hit Wyoming in 1885 while Furness hit it big with the Philadelphia and Reading, and turned the frontier bug and love of things Teddy Roosevelt into the Virginian–the first cowboy novel.

In those days, naturally, Stetson Hats were made here.