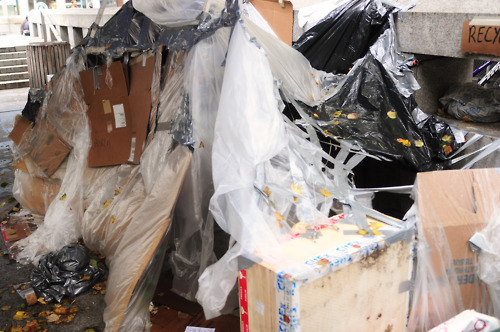 Over the weekend, several events took place at Dilworth Plaza that have undeniably changed the game for both Occupy Philadelphia (OP) and city officials. In the hours between Friday night and Sunday morning, with the Dilworth Plaza renovation project looming, OP voted to not to evacuate the space. That was followed by an alleged sexual assault of one occupier by another and Mayor Nutter responding to both events with a press conference, in which he stated that the City would reevaluate it’s relationship with OP.

On Friday evening, after five long cold nights of deliberation, the General Assembly (GA) of OP voted to approve a proposal to remain at Dilworth at the start of construction (the construction start date is in effect the end date of the permit issued by the city to occupy the plaza).

While many Occupiers were opposed to staying at Dilworth at all, not wanting to be percieved as blocking a job-creating, accessibility-improving project and favoring cooperation with City Hall over forcing a confrontation, the original proposal before the GA was to both stay at Dilworth and expand across the street to Thomas Paine Plaza. But OP’s legal working group advised that the City would not issue two permits and so the proposal was amended, removing the expansion. Though permits are not technically required to exercise the constitutional right to free speech and freedom of assembly, as the city requires them for demonstrations, they serve to provide a measure of legal protection against eviction and property seizure.

Ultimately, general mistrust of the City was a much larger factor in the decision to stay put than opposition to the Renovation itself. The Philadelphia Police Department’s (PPD) uneven history of violent misconduct, coupled with the fact that the nonviolent occupiers of other cities (Oakland, Berkley, Atlanta, Chapel Hill, NYC, etc.) have been brutalized by the police in recent weeks, understandably contributed to the Occupation’s skittishness.

It would perhaps go a long way to keep in mind that while demonstrators are viewing OP as a part of the narrative being shaped by other Occupations worldwide, the City is looking at it as a local issue, and approaching it as such.

The Occupation and the City were still meditating on Friday’s GA vote on Saturday evening when the news broke that an occupier had sexually assaulted another occupier in a tent at Dilworth Plaza. The victim immediately went to the police and the perpetrator was taken into custody. Details are still murky but the unfortunate fact is that OP has joined the ranks of Occupations dealing with serious crime. Occupy Wall Street, Burlington, and Oakland have been affected by deaths and alleged assaults and regardless of whether they were internal or external, they have had a serious effect on the public perception of the protests as well as the local governments’ approach to the Occupations.

Though details regarding the alleged assault on Saturday have yet to be confirmed, according to OP’s safety committee, OP had been aware of the presence of an alleged repeat sexual offender for some time (OP confirmed that it is not the same person arrested Saturday) and had even repeatedly requested help from the PPD in dealing with the situation. According to the OP safety committee, the PPD reportedly responded along the lines of “that’s not our job, get your men to do it,” and OP ended up issuing an alert to the public in the form of a flier with information about the alleged repeat offender.

On Sunday morning, Mayor Nutter held a press conference to address the GA vote to remain at Dilworth and the alleged assault. Citing breakdowns in communication between OP and City Hall, the perceived radicalization of Occupiers, and “growing public health and safety concerns,” he stressed the City’s need to reevaluate it’s relationship with OP and escalate the police presence, which up until this weekend had been steadily declining since the end of the first week.