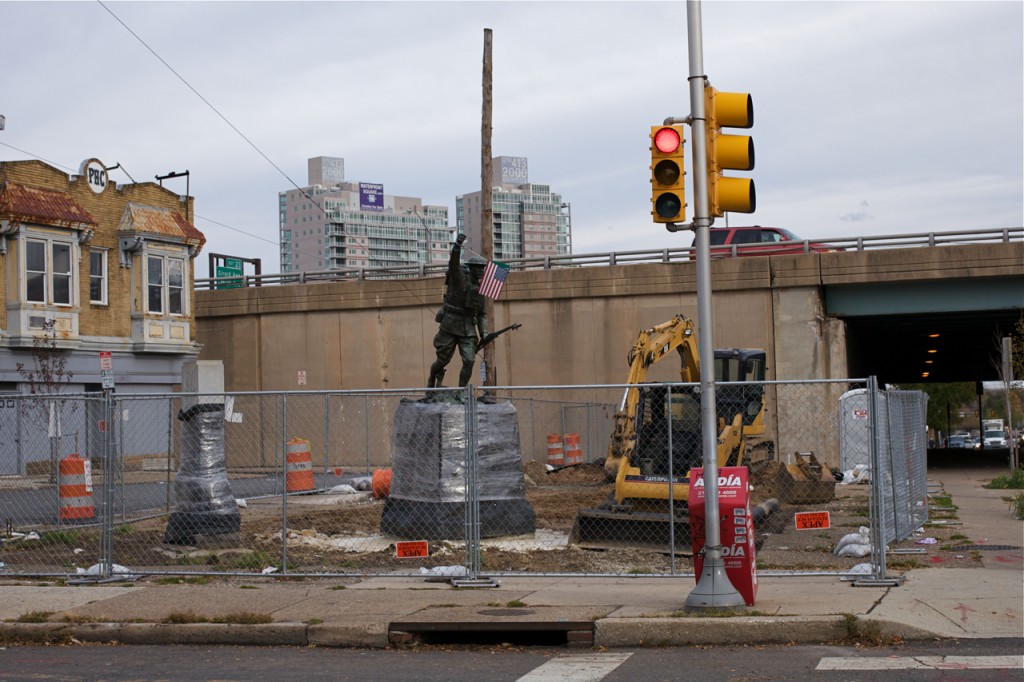 Call it the Second Street  Connector. In about a month the slim triangle at Second and Spring Garden will be a wedge park and a trail, designed by DIGSAU Architects, leading from the NoLibs core toward the Delaware Waterfront with Delilah’s along the way. 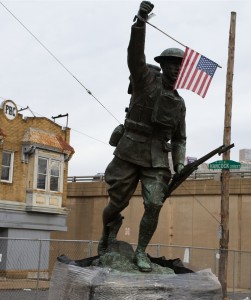 The spot is known for its statue of a WWI soldier or “dough boy.” Dedicated “IN MEMORY OF OUR BOYS OF THE SIXTH, ELEVENTH AND TWELTH WARDS WHO SERVED IN THE GREAT WAR OF NATIONS, 1914-1918,” the cast bronze statue is one of dozens of memorials produced in the 1920s by sculptor John Paulding. The statue, titled “Over the Top,” is sometimes misidentified as the work of E.M. Viquesney, who produced hundreds of extremely similar statues titled “Spirit of the American Doughboy.” They were so similar, in fact, that Paulding’s foundry sued Visquesney for copyright infringement.

The park will be excavated and sunken in to give the dough boy a proper backdrop and so that the space can serve as a rain garden. DIGSAU partner Jeff Goldstein says the park will have a bridge for those who normally use the park as a shortcut to the EL.

This one node is part of an interwoven chain of projects meant to better connect waterfront neighborhoods to the river.

Planning for the park began back in 2009 with a grant from the William Penn Foundation. The design was informed by intensive community input, synthesized by DIGSAU, and collaboration with the Philadelphia Water Department and the Morris Arboretum.

Anna Berezowska and Peter Woodall contributed to this story.