Dilworth Due To Begin 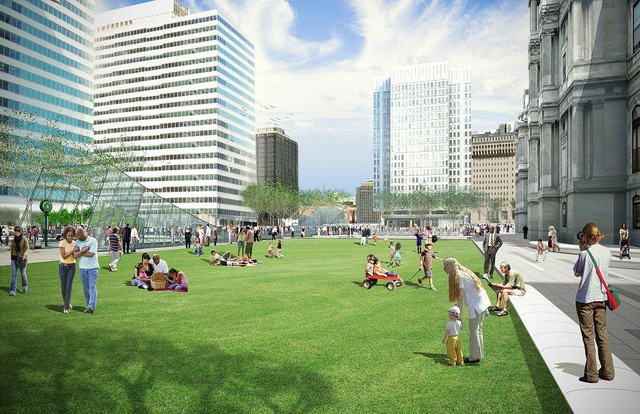 After three years of careful planning, the City is finally set to break ground on the re-imagined Dilworth Plaza next to City Hall. Or is it? Although construction is supposed to begin this month, Occupy Philadelphia, encamped at Dilworth for several weeks now, threatens to delay one of the most significant civic projects Philadelphia has seen in years.

The new Dilworth Plaza is a complete redesign of the fortress-like concrete and stone park on the west side of City Hall. First proposed by the Center City District (CCD) in 2008, the project brings together the expertise of Philadelphia’s own OLIN Studio landscape architects and KieranTimberlake Architects. Renderings illustrate the designers’ vision for a more welcoming landscaped space. It’s a simple, minimalist scheme, but one that will cost about $50 million. It’s pricy, but the design also integrates a reconstruction of the 15th Street El station entrance into the space above. 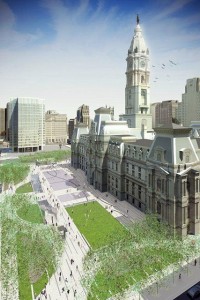 When the new Dilworth Plaza is completed in 2014, gone will be the unused subterranean courtyards that were a major feature of Vincent Kling’s original 1970s design. In their place will be an updated Market Street walkway flanked by a grassy lawn to the south and a large, 185 x 60 feet fountain to the north. Groves of trees, more appealing paved surfaces, and an abundance of benches will also be installed to help make the plaza a softer, more welcoming space. To encourage people to spend time in the new plaza, and not just pass through, a cafe much like the Parkway’s Café Cret will be constructed at the northern end, providing both indoor and outdoor seating.

The Dilworth design has evolved through several iterations, but the changes since 2008 have been relatively minor. These have focused largely on the new entrance canopy flanking the Market Street walkway at the plaza’s western edge, meant to deliver passengers and daylight to the SEPTA concourse below. Many observers believed the initial design, a long, boxy structure, created too much of a wall between 15th Street and the plaza. The architects took notice. Now, a sweeping glass structure will take its place, curving upward and outward from the ground to preserve much of the openness between the street and the park. 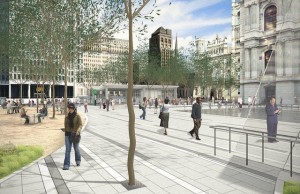 Although work on this major redo is set to begin in the next few weeks, the presence of Occupy Philadelphia has been a major headache for the City. Officials have informed Occupy’s leaders that they must move the encampment before construction begins, but the group has been slow to comply with the City’s request. Giving in to the so-called Philadelphia establishment could be a big blow to the power that Occupy has become, so its members are taking their time to make a decision.

Occupy is not necessarily opposed to the new Dilworth Plaza itself. The roots of their discontent lies in the way that the project was funded, with some Occupiers imploring that the $50 million budget be allocated to much needed education or community projects, not a “playground for the rich.” Many also find fault in the lack of public input during the design process, although CCD says there have been over 50 meetings since 2008.

Still, as Hidden City’s Katrina Ohstrom writes today, many occupiers feel resigned to the inevitability of the project. After all, Dilworth Plaza is really a public space shared by all and the project will provide hundreds of construction jobs. Occupy’s decision about the potential move will likely come this Wednesday, but the consensus so far is that moving will not give an impression of “caving in,” as Occupy’s media relations coordinator, Steve Ross, said today. “The occupation is what matters, not necessarily the space,” Ross believes. In any case, Occupy won’t be going far. If the decision is made to move, Thomas Paine Plaza (just across JFK Boulevard) will likely be the next destination, still in full view of City Hall.