Wal-Mart At Broad and Washington? 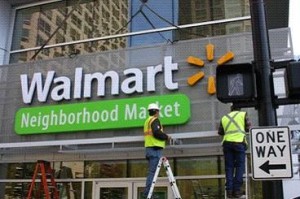 Sources say Wal-Mart, with a corporate strategy to capture the urban market, is exploring a deal for the massive lot at the northeast corner of Broad and Washington owned by a New York real estate firm, and once thought to be a site for a high density, mixed-use project. Wal-Mart has already opened a few stores in Chicago, and a half dozen more are planned there. What’s not at all clear is if the Broad and Washington project would be for a grocery-intensive mini suburban style Wal-Mart, as it appears some of the Chicago stores are, or if it would be part of a more urban, mixed use development, with Wal-Mart as the anchor.

“We’re very aware Wal-Mart is trying to figure out an urban store,” says Philadelphia deputy mayor for planning and economic development Alan Greenberger. “And we want to figure out how to urbanize them. We need to get past the name brand reputation. Yes, there is a lot to fear, but it’s our job to make them good urban citizens.”

Greenberger adds that the value of the land is too high for a low-density, single use suburban style development. That’s good news for those of us who lived through the early 1990s, when Philadelphia was so desperate for private sector development that nearly anything was allowed: a Rite Aid in a Center City historic bank, Rite Aids and Dunkin’ Donuts with surface parking lots on countless busy pedestrian corners, the decimation of key waterfront by big box retailers and their miles of asphalt parking lots, suburban fast food outlets on neighborhood avenues. Detritus, in those days, was the best we could do. 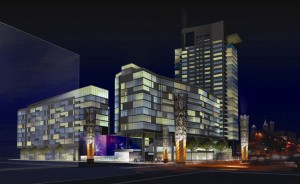 The Wal-Mart possibility nevertheless raises enormous questions for a city seeking to leverage its great sites for further community investment. Broad and Washington is, in fact, a terrific opportunity to bring high density uses (which benefit local businesses most of all) to a location rich in transit infrastructure, amenities, schools, and shopping. But Greenberger says that rents there may not be high enough to support a dense, multi-use development. “The market hasn’t quite caught to the location,” he says. 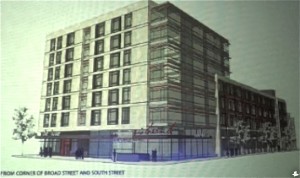 It has found its way to Broad and South, evident in Carl Dranoff’s forthcoming high density, mixed use project there, which Greenberger says will begin in 2012. And what began as a fairly uninteresting project, he says, has turned out to be “pretty sophisticated urban design.”