Schuylkill Trail Forges On (No Matter The Weather) 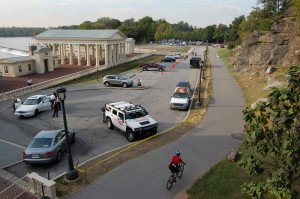 Two significant expansions of the Schuylkill River Trail in Center City are now under way.

Construction of a new overpass just south of the at-grade railroad crossing at Locust Street is scheduled for completion in late 2012. An extension to the South Street bridge, in the form of a boardwalk out over the Schuylkill River will begin in December and is scheduled for completion a year later. Ultimately the SRT will extend south, cross the Schuylkill near Grays Ferry, traverse Bartram’s Garden and intersect with the Maine-to-Florida East Coast Greenway.

In the not too distant future, Schuylkill Banks will be a connecting link in the continent-spanning network of bicycle trails that is now taking shape. 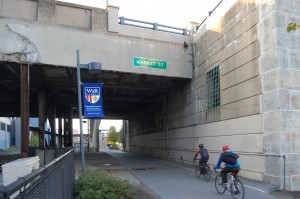 But we should remember that Philadelphia’s Schuylkill Banks is more than a world-class fitness and recreation amenity. The SRT also serves as a vital commuter artery. Point in fact: after each flood, the Schuylkill River Development Corporation, Philadelphia Parks & Recreation, Philadelphia Water Department, and hundreds of volunteers work to clear flood debris and re-open the trail as soon as possible. With the early season snow recently melted, it’s worth noting that within city limits, city plows are dispatched whenever needed to spread road salt and clear snow from the trail.