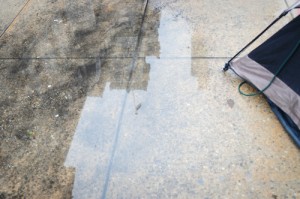 Philadelphia has a unique challenge ahead of it. The permits that Occupy Philadelphia secured a month ago to camp in Dilworth Plaza on the west side of City Hall will end with the start of a $50 million renovation project that has been in the works since 2008. As Kevin McMahon reports today, the complete overhaul of the plaza, which is expected to take 27 months, will transform it from an awkward, outdated, multi-level space inaccessible to those with mobility issues, into to an open, flat, accessible public living room. The new plaza will feature grass, trees, a cafe and an interactive water feature that can be used when dry for public programming or as an ice rink in the winter. This project will coincide with the long overdue renovation of the dingy, byzantine 15th Street Station, whose own inaccessibility was a catalyst for the entire project. 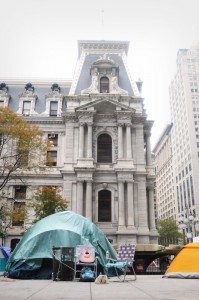 Over the past month, OP has evolved from a small group of tents into a massive encampment. At last count there were about 320 tents. Each day, volunteers serve over 1,500 meals, prepared a couple of blocks away at the Friend’s Center. There is a sizable homeless population numbering upwards of 150. All this means that like it or not, OP cannot be ignored.

But as the project groundbreaking nears, the communication between City Hall and Occupy Philadelphia has been inconsistent. An early OP working group, which had been meeting with city officials, was disbanded and a request for weekly meetings was rejected by OP’s general assembly. The OP Legal Working Group, comprised of activists (organizers, law students and lawyers), has been functioning as the “official” liaison with the city. Despite these challenges however, thanks to both parties being quite media-savvy and aware of their public image, Philadelphia has so far avoided the violent clashes that have plagued NYC, Oakland, and many other Occupations.  (It is important to note that the National Lawyers Guild, who has been a constant presence at OP,  though they will provide services if requested, mantains a position of neutrality).

“I don’t think that Occupy Philadelphia is about blocking positive public projects that create jobs,” says deputy mayor Rich Negrin. “The process of Direct Democracy is challenging. It’s not the most efficient form of decision making.”

The city, he says, would be “happy to have a talk about potential relocation spots that are visible, around Center City, where the Occupation can exercise their rights of free speech.” The likeliest location is Thomas Paine Plaza, below the Municipal Services Building, across the street from City Hall.

Over the weekend, I interviewed a handful of Occupiers to gauge their reaction to the looming eviction. Given the purposely decentralized and politically heterogeneous Occupation, it’s important to note no one speaks for OP. Each member of the movement ultimately acts autonomously, though often in solidarity with others, and can only speak for herself.

“It would be a huge strategic failure to be herded to another location by the city without our demands being met,” said an Occupier who wished to remain nameless. Refusing to leave could be a leverage to demand gender and racial equality in employment and that permanent jobs created are quality ones with decent benefits. In addition, forcing a conflict could be a “vehicle for a larger structural critique,” a catalyst for more fair and transparent public spending.

It’s worth noting that the Plaza’s namesake, Richardson Dilworth, is a hero of liberal reform. He served as Treasurer and District Attorney before becoming the city’s 91st mayor, serving from 1956-1962. Along with Joseph Clark, who served as Mayor before him, Dilworth ended a 67-year period of uninterrupted Republican control of the city. The Clark-Dilworth era is regarded as a high point for urban planning, as they successfully reversed the decline of Center City as a residential and commercial center. Dilworth was also instrumental in a reform movement that replaced a patronage system with civil service exams for city officials. 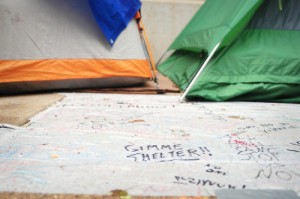 “I am opposed to moving, but I am constantly reevaluating my stance as I get new information, ” says Jacob (who asked his last name not be used), who has been camping as often as his work schedule allows and was among those arrested at the 8th street sit-in outside of the Philadelphia Police HQ on October 22nd. He feels that the idea to leave due to the permit expiring is “absurd–this is an occupation.” He does not feel that the City’s offer of a new permit at Thomas Paine Plaza is genuine and that they could pull it at any time. “It is not just the occupation that will be evicted. There are many homeless who live here and they may lack a political voice.”

Ryan O’Hara, who has been camping at Dilworth Plaza since October 7th, says that if jobs would not be blocked he would advocate staying, but that OP “needs to be better than the system and individuals we are contesting. People are afraid of relocating being seen as a sign of weakness, I see it as a sign of unity. It demonstrates that we have an understanding and caring for the concerns of accessibility and jobs.”

Many Occupiers, though opposed to certain aspects of the project acknowledge both it’s inevitability and the fact that when all is said and done, in addition to vastly improved access for those with mobility issues, hundreds of union jobs will have been created. Union solidarity has been crucial to the movement–it was instrumental in halting Occupy Wall Street’s eviction from Zuccotti Park early on October 14–and, they say, Philadelphia is very much a working class city that has been hit hard by the recession. They view blocking the Dilworth Plaza renovation as unwise, regardless of the morally gray nature of the project.

“When I tell my grandkids why I was arrested in 2011 or 2012, I want the story to make them proud,” says Anne Gemmell, a mother, former history teacher, and the political director at Fight for Philly. “History will wonder why Occupy Philly was protesting a construction project to allow access for the disabled. If I ever get arrested, I want no doubt about why and I want that reason to clearly be a part of the movement at hand.”

Negrin reaffirms the city’s even-handed approach. “I hope we’ve worked together to avoid showdowns, exercise free speech, show the world that Philadelphia is different, but that it will not stand in the way of a public project creating 1,000 jobs for the 99 percent.”