Editor’s Note: Paul VanMeter is a builder of gardens and landscapes and one of the advocates at ViaductGreene, which seeks to expand the Reading Viaduct project to include the submerged section of the City Branch (visible from behind the Rodin Museum). His blog is HERE. 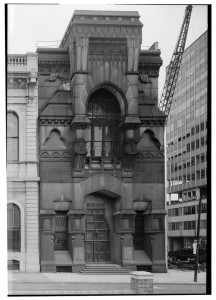 Sexy-ugly. So it goes with Frank Furness and his buildings. They were and remain, noted Preston Thayer in The Railroad Designs of Frank Furness, “intensely powerful, sometimes almost deliberately perverse, full of unexpected juxtapositions of the gentle and the tough, the big and the small, the refined and the raw. These elements come together as a complex, energetic whole, and it is no exaggeration to speak of Furness’s buildings as embracing the whole scope of 19th-century American culture. It seems right and natural that Furness’s father’s close friends were Ralph Waldo Emerson and Walt Whitman: honesty and passion are the themes of his architecture, as much as space and light.” So was the natural world, all its design, all its botany. Frank Furness was a close observer. 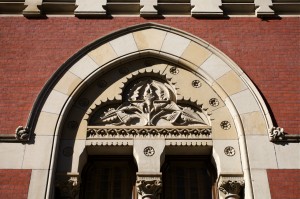 Cavalry Captain Frank Huyling Furness left the Civil War with a Congressional Medal of Honor and a powerful sense of agitation, turbulence, rank, order, organization and warfare–ideal traits for an architect in the late 19th century, a time in which industry, particularly railroads, took on a militaristic decentralized and divisional structure. Armies were set up by Divisions, so were railroads. It’s no wonder Furness found his way so well in the newly machined “Workshop of the World.”

As a kid growing up in Reading, Pennsylvania, all I knew of his work was that it was Railroady. My tattered copy of Edward Lewis’ Reading’s Victorian Stations and my own exploratory adventures along the Schuylkill River Valley told me. I liked trains. I liked the physical structure of the railroads and the landscapes through which they moved. The Machine in the Garden.

In 1879, Furness became the official architect of Franklin Gowen’s Philadelphia & Reading (P&R), for which he earned a monthly salary of $250. He proceeded to design over 100 projects. Writes Michael Lewis in The Architect and the Violent Mind, “a ride on the Reading would likely have been taken in a passenger car of his design, perhaps from and most certainly past stations built, altered or expanded under his direction, and would travel along a right-of-way dotted with freight houses, tool sheds, signal towers and watchman’s boxes designed by Furness, and painted in color schemes selected by him.” That ride on the Reading was a branded experience, something new and impressive for a powerful sprawling system.

Furness made plans for a consolidated terminal at P&R’s 9th & Green Street Station; the plan got scrapped in favor of a downtown terminal. By 1884, New York interests controlled the P&R, which explains why New York architect, Francis H. Kimball, was retained to design its new terminal and offices at 12th & Market. Too bad J.P. Morgan and Tony Drexel pulled the plug on Gowen and his fantastic westward expansion, the South Pennsylvania Railroad as Furness was set to design plenty more. Instead, Gowen and Furness got the boot. 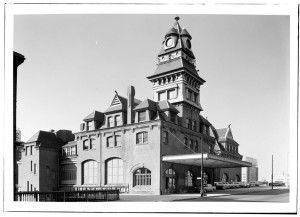 Before his last P&R stations were completed, Frank found good work with Baltimore & Ohio (B&O), designing over two dozen projects, which included all but one along the 111-mile Philadelphia Extension. B&O knew to move away from in-house architect Francis Baldwin for this important venture North through Philadelphia and onward to the Hudson over P&R rails. The B&O work looked different, less Victorian than the P&R, toward a weightier shingle-style massing. For me, Philadelphia’s 1888 24th Street Station is his crowning achievement. Framed clapboards, clipped gables, shed dormers, and shingles give way to exposed iron and riveted interior columns – industry incarnate. 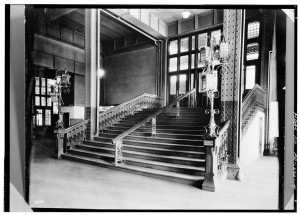 For the mighty Pennsylvania (PRR), Furness’ commissions included not only stations, but the 1890 rebuilding of the Bryn Mawr Hotel, Hudson River ferryboat interiors and the Jersey City Ferryhouse Terminal. From the early 1870’s, Furness designed homes and alterations for four Pennsylvania railroad presidents. It’s no wonder that under A.J. Cassatt, Furness got the job for his largest, longest lasting and personally most imaginative masterpiece: the 1892 rebuilding of Broad Street Station, meant to outdo the Reading Terminal three blocks away.

Throughout the 1890s, Furness shaped the Philadelphia-New York passenger experience, according to Michael Lewis. “It had the stamp of his best work,” he writes, “an absolutely rational system of circulation, a resourceful use of modern materials and engineering, and a lavish use of ornament–to describe, to conduct, and to celebrate. Of all nineteenth-century architects, perhaps only Otto Wagner, in his Vienna stations and bridges [also c.1890s], exceeded Furness in his willingness to confront the city with the railroad.” 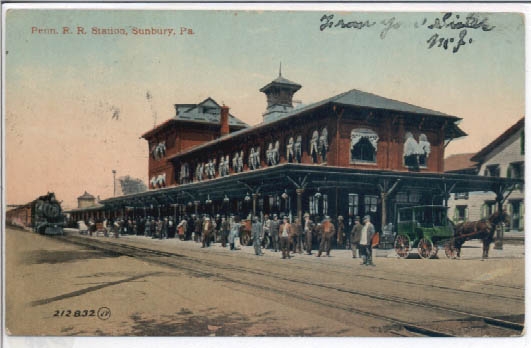 In Philadelphia and all along the Schuylkill Valley, Furness is palpable. While few structures remain, along the rails and abandoned rights-of-way especially, his influence haunts. In 1884, retaliating against the pesky, expansionist P&R, the PRR built its ill-considered Schuylkill Division. PRR’s architect, W. Bleddyn Powell, ripped off Furness motifs, but his more purely Queen Ann sensibility was a lot less fun. The muscular poetry wasn’t there.

In The Brown Decades (1935), a study of the arts in America in the last three decades of the nineteenth-century, Lewis Mumford summed up Furness in a single sentence: “the designer of a bold, unabashed, ugly, and yet somehow healthily pregnant architecture.” Sexy-ugly, indeed!

The attraction to contrasts draws our attention to the gritty industrial relics inherited from Furness and his colleagues and envisions new uses. Harvard professor (and railroad enthusiast), John Stilgoe has spent a lifetime observing America’s built environment. “In order to discover the shapes of the past,” he says, “one must read the shapes of the present as one reads a palimpsest, looking for details perhaps overshadowed by newer building and then ascertaining their evolution and contemporaneous meaning.”

Beneath two new and exciting open-space projects, palimpsest awaits explorers. Whether authentically Furness, or Furnessian by some lesser appropriation by Powell or a crafty Division Road-Master, the flower rises through the machine.

VIADUCTgreene seeks to repurpose the soaring and submersive 1890’s landscape infrastructures that are the P&R’s 9th Street and City Branches by creating a gardenpark of intersecting culture and wildness, traversing three miles through Center City, 30 feet above street level and 30 below.

Furness would love that we’re observing and imagining. As we celebrate his life, observe and study the details of his work, we better understand the contemporary context for creating anew.