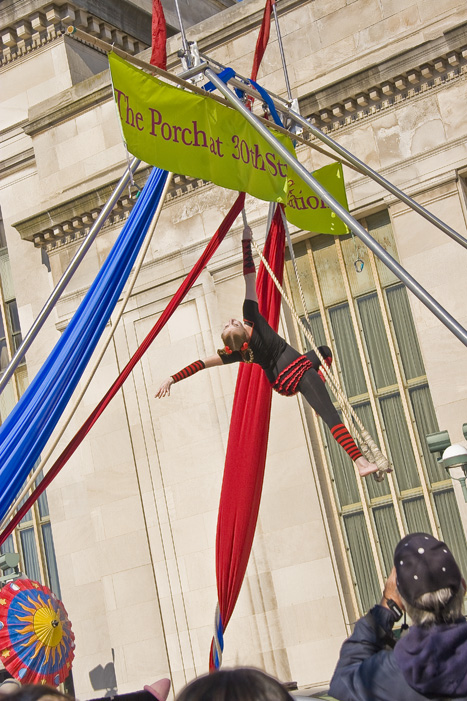 Mayor Michael Nutter was proud to announce yesterday the beginning of a transformation of the urban space that had bewildered him for all his life as a resident of West Philadelphia, the bland and barren stretch of Market Street just south of 30thStreet Station.

After several months of construction and a community-driven search for a name (some 500 suggestions), it is now “The Porch at 30th Station,” a public plaza that seeks to evolve and connect.

The Porch is the result of the University City District (UCD) seizing upon an opportunity to “piggyback” on PennDOT’s street improvements. Other organizations, civic groups, and companies like Amtrak and Brandywine Reality Trust, who together flank the space, were engaged in the process. With such limitations, designers looked to Manhattan for inspiration, citing Gansevoort Plaza and Greeley Square Park as examples of the novel “Lighter, Quicker, Cheaper” philosophy in big city public space.

Nutter remarked that the plaza is emblematic of Philadelphia’s new approach to take the initiative in its own transformation. “We don’t have time to sit around and debate … What we want to do is create big, open, public spaces.”

All of this institutional collaboration, creative design, and financial realism explains the project’s small price-tag of $300,000.

UCD head Matt Bergheiser told the hundreds present that the Porch was envisioned as a truly public space—“a blank canvas,” to be defined by those who walk among it. 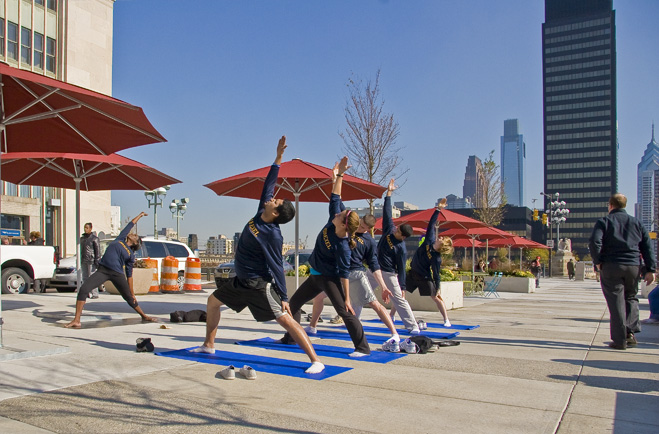 To advertize the possibilities to be offered by the Porch, circus performers, farmers’ markets, and Drexel students practicing yoga were present.

Project Manager Prema Katari Gupta called it a “democratic space” that will suit the needs of upwards of 250 people at any one time. Considering that some 16,000 people work within a five minute walk from the Porch, there is a great deal of faith within UCD that that kind of figure will be commonplace.

Gupta also claimed that a research assistant would be analyzing the public’s behavior during the Porch’s “beta-testing” in the coming months. “Are users sitting or standing? Are they alone or in groups? Are they reading or talking or eating? Where are they in relation to shade, pedestrian traffic, and other elements?”

Being as all of the space’s elements are moveable, that data will guide its future development.

The other major talking point was the possibility for this most immediate intersection between Center City and West Philadelphia to better promote a sense of spatial fusion among what is increasingly being regarded as “a single, thriving business district, from Front to 40th streets.” 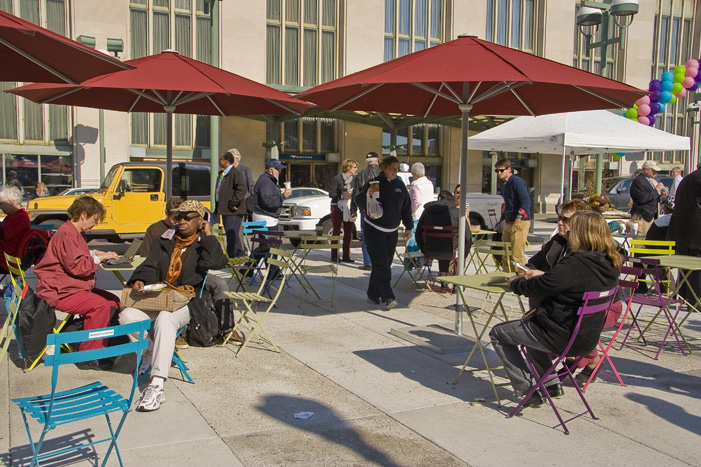 Bergheiser admitted as much in explaining the choice of the name. “Porches serve as transition spaces as this does, first between the indoor grandeur of the station and the wonder and expanse of the city, and second, between the vibrancy of Center City and the dynamism of University City.”

Stephen Gardner, Amtrak’s Vice President of Strategy and Development, spoke of his company’s enthusiasm to invest in Philadelphia’s future, as 30th Street Station remains the third busiest point within their system. New arrivals from Washington and New York will be introduced to Philadelphia through this space for years to come.

Gateway and crossroads were also words liberally thrown about throughout the festivities. A more telling descriptor of the UCD’s aspirations, however, would be this, voiced by William Penn Foundation President Jeremy Nowak: “the hub of the rebirth of Philadelphia into a 21st century city.”