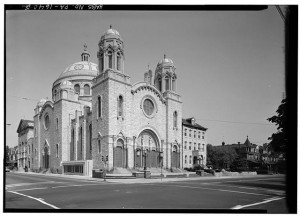 The long-anticipated $2.5 renovation of the colorful domes of the Saint Francis de Sales Roman Catholic Church at 47th and Springfield will end next week when the scaffolding, in place since August 2010, is removed.

Constructed in 1907-11, Saint Francis de Sales has anchored the Cedar Park section of West Philadelphia for over a century. The church, which was designed by local architect Henry Dandurand Dagit (1865-1929) and modeled after the Hagia Sophia, is considered an architectural standout. Renowned designer Rafael Gustavino (1842-1908) created the distinctive tile domes that can be seen from as far away as the Schuylkill Expressway. Venturi & Rauch (fl. 1964-1979) more recently modernized the sanctuary.

Since 2007, a team headed by Historic Building Architects has been working to identify and correct the building’s problems. Phase I of their conservation plan, which will be totally completed in January, entailed restoring four of the six domes (including the 60’ wide main dome), replacing porous patches of roof, and reinforcing parts of the limestone facade. 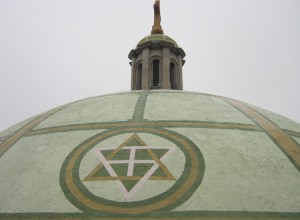 According to Annabelle Radcliffe-Trenner, Principal of Historic Building Architects, the domes were painted rather than fully-restored because a full restoration would have been far too costly, requiring removal of the remaining tiles and the concrete beneath, which were both haphazardly applied in the 1950s. Instead, the 1950s “subway” tiles were removed and the concrete surface was painted according to Gustavino’s original specifications.

The restoration was funded in part by an $80,000 grant from Partners for Sacred Places. According to President Robert Jaeger, Partners backed Saint Francis de Sales because “it’s an architectural landmark, it’s a place where people are served, and it contributes to the life of the neighborhood.” He hopes that this milestone “will give the parish new energy and new confidence to take care of the building and to use it for their work.”