What It Means To Create 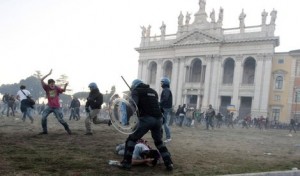 From a pair of excellent urban observers, some things to remind us–in this city of apparently relentless violence–of the sometimes harsh reality of the wider urban world.

Alma Guillermoprieto, a writer based in Mexico city, recently returned to San Salvador; she hadn’t been there since the early 1980s when civil war began. Well, things aren’t going so well, according to her essay in this week’s New York Review of Books. In the section of the city know as Montreal, which is ruled by ferocious drug gangs, violence and terror are rampant, and nationwide, there are 65 homicides per 100,000 residents (the rate in Philadelphia is about 20 per 100,000). Gang initiation involves a random killing and last year one of the gangs set a public bus going to the large Mejicanos market on fire, killing 17, all of whom burned to death.

Meanwhile, in Rome, what was to be an orchestrated non-violent vigil against the Berlusconi regime last week was over-taken by young masked men and women. They opened a vicious five hour street fight, which ended with 135 people in the hospital. The fierce violence has caused a moratorium on public protest in Rome, and of course, it shines a light on the vast protest/occupations happening across the world.

To NYRB writer (and professor of architecture) Ingrid Rowland, who was caught in the violence with some students, the act was savage and foolishly destructive, and therefore anti-urban. “The spoiled kids who took over their demonstration,” she writes, “are the direct descendants of the young men in tights who ran riot in Verona in the days of Romeo and Juliet: the Mercutios and Tybalts of our era, people who have never had to make anything in their lives and therefore have no idea what it means to create even a small thing like a window, a planter box, a store, a tree, a home, a work of art, a human hand, a face.” 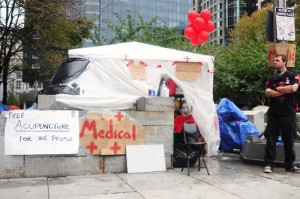 In contrast, according to photographer/curator Marianne Bernstein, whose work I profile in today’s Inquirer, the occupation impulse is similar to that very generative–and therefore pro-urban–act of reclaiming vacant land. She therefore believes positive things will come of the occupation–for the protesters themselves and the city. “A lot of people look at protestors as naïve,” she says, “but in the end there is so much power in the experience. There’s so much life there. And they have to invent something here, they have to invent.”