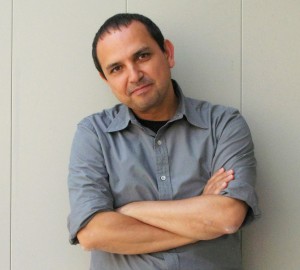 Best known for his advocacy and planning work along the US/Mexico border, the internationally acclaimed Teddy Cruz manages to seamlessly blur the line between architect and activist, planner and provocateur. Along with his firm, Estudio Teddy Cruz, the Guatemalan born American citizen has collaborated with marginalized communities (and their governments) around the world to build physical spaces and, equally as importantly, to challenge the dogma of top-down planning.

Monday afternoon we sat down with Cruz, who was in Philadelphia earlier this week to deliver the keynote address at the Community Design Collaborative’s Design in Action conference and to take part in an impressive collaboration between some of the city’s high-profile cultural and design institutions and young people from West Philadelphia.

Currently in an embryonic stage, Mixplace Studio is a collaborative research and mentoring initiative between Estudio Teddy Cruz, the Slought Foundation, the People’s Emergency Center, and the Cartographic Modeling Laboratory at PennDesign. The collaboration will facilitate a reciprocal mentorship between youth from the Mantua and Belmont neighborhoods of West Philadelphia and area university students in architecture and design. In the first phase of this program, the youth scholars will acquire the formal skills needed to create images, maps, models and multi-media files that will be used to transform the primary exhibition space of Slought Foundation into a site of collaborative knowledge production. The project’s eventual goal is to activate a reclaimed lot in West Philadelphia.

Stay tuned for further coverage of Mixplace as the project develops.

KO: What were some of the challenges you faced restructuring zoning codes in California?
TC: I would have to begin by saying that it is in fact our challenge right now to address this relationship of space and politics, changing and advancing the very politics and economics of development that have produced the current crisis. 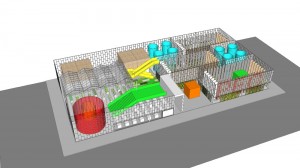 KO: And this means posing questions.
TC: How do we produce new housing paradigms? How do we produce alternative spacial configurations that can respond to a very different notion of the political? In that sense, one could say, for example, lets begin by re-imagining zoning that’s conceived as a punitive tool. But can we imagine it as it should have been from the beginning, as a generative tool, to organize activity, to organize economy, and ultimately, social interaction?

So, in San Ysidro, we had to deal also with suggesting a kind of re-imagining of zoning so that it is a bit more open to transient uses, temporal, ephemeral activity and so on and this is very relevant for imagining Philadelphia because this is seemingly what people have been arguing, can there be support for the activation of some of the leftover spaces?

KO: Encouraging density is part of this?
TC: If we go to Paris we see how a street operates through small businesses with 5 stories of housing above, walking to the metro station, in the corner, a public park…all these cities that we admire are in fact made of that kind of density, but it’s not the image of density that is reduced to overcrowding people in sterile housing projects, it is an idea of density that enables the complexity of relations across infrastructure, transportation, public space and so on. We know that all this is obvious, but nevertheless its still in the minds of the American public that density is a kind of dangerous word.

KO: With your project in West Philadelphia–Mixplace Studio–which is still in the conceptual stages, what challenges do you anticipate?
TC: It’s a pilot project but we hope that the conversation that will be generated there will be material to rethink housing models and other types of programming that can be injected into those housing models.

KO: Philadelphia is notorious for being a “city of neighborhoods”, each with their own histories, socioeconomic structure, social and ethnic dynamics, there are a lot of longstanding borders and boundaries. Has this been part of the discussion regarding Mixplace?
TC: What one neighborhood person brought up was that one place of reflection and research could be 40th and Lancaster, it was like a border zone, where four different neighborhoods came together with very different attitudes. The project depends upon shaping new pedagogical models, in designing new programs, bringing in artifacts, devices to debate issues, to expose controversies in the neighborhood. All of that needs a lot of nurturing, a lot of care, a lot of curating.

KO: Has there been discussion about land trusts and land ownership in West Philadelphia?
TC: Yes, that is an essential topic, how to recuperate community land trust legislature, how to rethink other modes of property. You hit the nail on the head at this moment. That could be one particular set of interactions with Mixplace, to take that topic, the urgent need to rethink property.