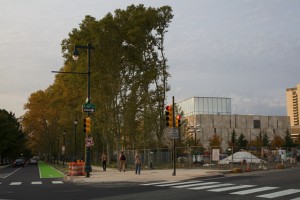 On my way to talk Collab and Zaha Hadid at the Perelman Building on Tuesday, I walked the Parkway for the first time in a while. Paul Levy’s goal has been in effect to complete Paul Cret’s vision for the grand promenade, which was immediately compromised by the automobile and by the city’s pathological lack of follow-through. A few weeks ago Levy showed me plans for the various unbuilt fountains meant to ring the Swann Fountain (these are partly his inspiration for the Sister Cities Plaza fountain and mountain stream). His goal has also been to give the long and largely ceremonial space some life, with the ultimate hope of having something engaging for the pedestrian between City Hall and the Art Museum every few minutes.

In the bright autumn sun it’s easy to see the rather ambitious project coming together, particularly once Dilworth Plaza and Love Park are renovated next year. The cafe and gardens at Sister City are nearing completion, the trees are planted in the garden next to the Barnes, which itself is far along. A child was playing in restored Rodin Museum garden, the fountain bubbling for the first time in my memory. In front of the Central Library, temporary plantings have replaced the decrepit plaza and soon, a section of Logan Square will be reclaimed (victories come large and small), as an opening for the Vine Street Expressway is covered by PennDot (look for the Library to push for covering another, slightly larger opening to the east). 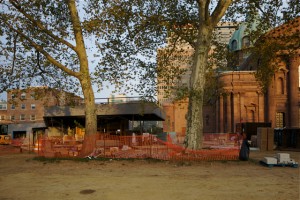 The restored sidewalks and curbs have been done quite well, with high-quality materials, smart signage, and new street paving. The same crew we captured painting the South Street bike lanes green has moved to the Parkway, where they’re at work now. This is certainly Philadelphia putting its best foot forward.

And yet even with the Barnes open this spring the Parkway will fall short of Levy’s goal, especially on the south side of the street. It is still an arduous, boring walk to the Art Museum. All the energy of Center City–and on the north, of Fairmount–seems distant. In Athens, in preparation for the 2008 Olympics, planners reclaimed a similar road, Apostolou Pavlou, which leads to the real Acropolis. They did so most effectively by drawing the energy of the Thissio neighborhood into the juniper landscape of the ancient world. But can Center City’s energy hurdle the band of street, fence, expressway, and parking on the south, and the wide yawn of Pennsylvania Avenue on the north? In Athens, the neighborhood streets run right up to the edge of the Apostolou, and they are filled with cafe tables and vendors.

The dead zones along the edges–created by the Vine Expressway and the intersection of the bust, at 19th and Arch–are in a sense a reminder of the monumental difficulty of reweaving the city through a landscape yet wedded to the car.

But one point on the southern edge, of course, was supposed to be activated by a Calder Museum. That seems now like a distant dream. On Friday in New York, and seemingly in conjunction with the Calder Foundation, which was to open the museum here, the Pace Gallery Uptown will open “Calder 1941.” Randy Kennedy, writing in the New York Times, calls the show “a kind of miniature museum.”