Sneak Preview Of The Artblog’s Safari 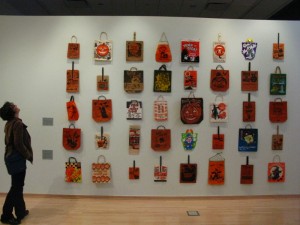 Hidden City went along on The Artblog’s inaugural “Art Safari,” which traveled to Temple Gallery, Little Berlin, and Rebekah Templeton Contemporary Art on Saturday. The Safari revealed just how much art is informed by the life of the city, and vice versa. The Temple Gallery show, curated by Gallery director Rob Blackson, begins with “questions you don’t have an answer to,” in this case about Philadelphia’s relationship to its many contexts, among them water, soil, and history. The show is meant to use art for exploration.

That’s the just the idea behind the Art Safari, which beginning March First Friday, will take a dozen or so people to places in the city where art feels vital, personal, and necessary. That was certainly the story at Little Berlin’s “The Big Idea” and Zine/Book fair, where a dozen or so small book and zine authors and self-publishers spent the weekend selling their work. “It’s a heroic act,” said the collective’s Beth Heinly of the act of book making. 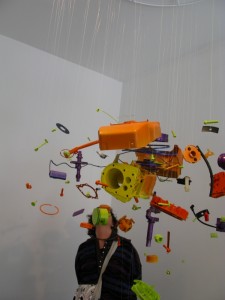 The last stop of the day was to the small husband-wife Rebekah Templeton gallery on Girard Avenue for a terrific show of work by Philadelphian Timothy Belknap. Surely the highlight was a lawnmower Belknap dissected, the part lifted into the air like a technicolor dream.

See our Rob Armstrong at Temple Gallery this Tuesday at 6:30 for “Reclaiming Nature in an Industrial Age,” a lecture on the history of Fairmount Park, part of the Gallery’s exploration of the city’s relationship to water and related to Richard Rigg’s sculptural installation, “This One, The Next, and the One After That.”