Scots Cozy Up To Irish 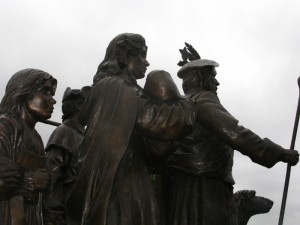 Without much fanfare, the Monument to Scottish Immigrants has joined the Irish Memorial at the southeast corner of Front and Chestnut. The bronze monument (on a granite base) depicts a Scottish family led by its patriarch and the faithful Scottish deerhound. His son, who arrived in advance of the rest of the family, is already dressed as a frontiersman, ready for his new life in America.

Created using the ancient “lost wax” method, the monument was sculpted by Terry Jones, who is known for his works in museums and battlefield–from Great Britain to Gettysburg. Laurie Olin, who is of Scottish descent, carried out the landscape design. Along with three “standing stones” adorned with educational bronze bas relief plaques, the monument partially takes over a dog park at that location.

The Monument to Scottish Immigrants was spearheaded by the St. Andrew’s Society of Philadelphia, which was founded in 1747 by some 25 prominent Scots as a charitable association devoted to assisting Scottish immigrants arriving in Pennsylvania. It seeks to recognize the courage, skill and tenacity of the many thousands of Scottish immigrants who left their homes to cross the stormy Atlantic and who settled as farmers and frontiersmen, as well as architects, designers, bankers, soldiers, and statesmen. 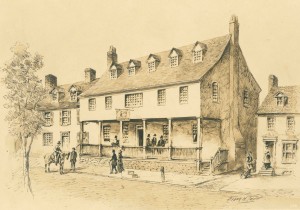 The monument’s location is very close to the original location of Tun Tavern, where the St. Andrew’s Society was established. Philadelphia merchant Samuel Carpenter and his brother Joshua opened the Tun Tavern brew house and inn at King (Water) Street and Tun Alley in 1685, during the city’s youngest days. (The old English word “tun” means a barrel or keg of beer.)

According to tradition, the Tun Tavern is where the United States Marine Corps held its first recruitment drive. On November 10, 1775, the First Continental Congress commissioned Samuel Nicholas, a Quaker innkeeper, to raise two battalions of marines in Philadelphia. The tavern’s manager, Robert Mullan, was the head recruiter. Prospective volunteers flocked to the place, enticed by cold beer and the opportunity to join the new corps. The first Continental U.S. Marine unit was composed of one hundred Rhode Islanders commanded by Captain Nicholas. Each year, on November 10, U.S. Marines worldwide toast the place. 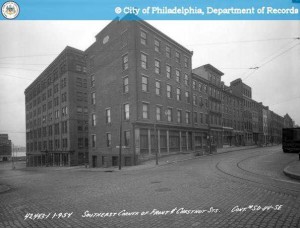 The southwest Corner of Front and Chestnut Streets in 1954.

Fire destroyed the revered colonial inn in 1781 and other commercial buildings took over the corner until I-95 obliterated this part of Philadelphia’s port. The original site of Tun Tavern is now under the highway, so you can visit it—but only briefly as you pass over it at 65 mph.

By the way, the striking bronze Irish Memorial is a sculpture-in-the round that brings to life the story of An Gorta Mór (the Great Hunger) and pays respect to the Irish men, women and children who perished during the famine between 1845 and 1850 caused by potato blight. It also celebrates the millions of Irish immigrants who came to the United States seeking a better life. Crafted by eminent sculptor Glenna Goodacre, the work was dedicated on October 25, 2003. 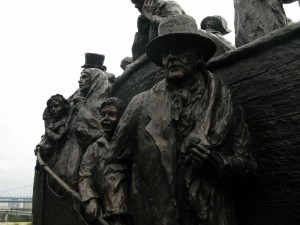 The 1.75-acre memorial grounds are on top of the northern I-95 overpass. This high vantage point overlooks the Delaware River and is a fitting location for both the Irish Memorial and the Monument to Scottish Immigrants because countless Irish and Scottish disembarked ships and entered Philadelphia (and the nation) along the riverfront nearby.