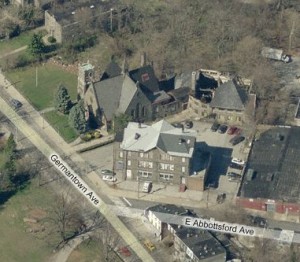 Throughout Germantown, dozens of architectural gems stand vacant and underutilized. On one particularly afflicted block–the 4700 block–every building but one is vacant. But this summer, Weinstein Properties purchased one of those buildings, which is now scheduled for rehab and leasing.

The former Charles Schaeffer School, located two blocks north of Wayne Junction Station and across the street from Loudoun Park, graces the southern end of the block, below the overgrown Germantown Settlement Charter School complex and the crumbling Wakefield Presbyterian Church.

The Schaeffer School was built in 1876 by the School District of Philadelphia. The district’s Superintendent of Buildings, Lewis Esler, is cited as the architect of the building. The school is a rare example of a particular moment in public school design, in which brick yielded to stone, because schist had become abundant in the Wissahickon Valley, and in which open classroom spaces were divided into more specialized spaces, as prescribed by architect Samuel Sloan. 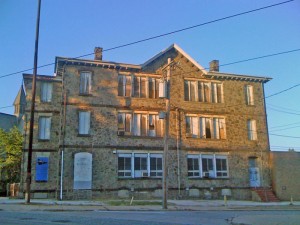 In July, Weinstein Properties purchased the school for $150,000 from the Mitzpah Seventh Day Adventist Church. Mitzpah had owned both the school and the adjacent Wakefield Presbyterian Church, but abandoned them to move into a larger historic church, the former Frankford Baptist Church (1853-1855) at 4357 Paul Street.

Ken Weinstein, principal of Weinstein Properties, was not deterred by the school’s dilapidated condition nor bleak surroundings. “I love the way the Schaeffer School sits at an angle on the property,” he said. “It was a building just waiting to be saved. My passion is renovating vacant, deteriorated commercial buildings and this one fit right into our mission.” 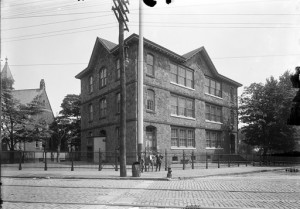 The school as it appeared in 1913. Photo: Free Library of Philadelphia

At present, Weinstein is clearing out the interior of the 10,000 sq. ft. building, which has retained little more than its original woodwork. When a tenant is obtained, he will outfit the interior according to the tenant’s needs. Thus far, a number of organizations, including a church and a school, have expressed interest in the property.

We reached out to the Nicetown CDC as well as Elfant Wissahickon Realtors for comment. Robert Elfant, principal of Elfant Wissahickon, said that he is glad that Weinstein is investing where few others would and added that “Ken is a smart, sophisticated developer who is also community-minded. I have confidence that something good will come of this.” The Nicetown CDC did not respond.