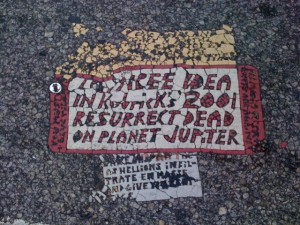 Some variation of the above words is all over the streets of Philadelphia, covering countless intersections from Center City to Packer Avenue, City Line Avenue and points in between. While these words are etched in the streets of cities elsewhere in both North and South America, Philadelphia is the spiritual home of the Toynbee Tiles.

The tiles are the subject of a recent documentary film, Resurrect Dead: The Mystery of the Toynbee Tiles, which screened to sold-out audiences at International House in September and won filmmaker John Foy the Best Director honors at this year’s Sundance Film Festival. The film is available for download on iTunes HERE and Video On Demand HERE. 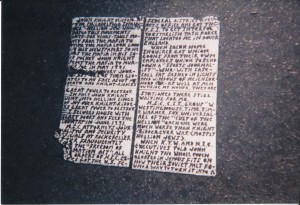 Artist Justin Duerr, along with his Philadelphia-based cohorts, filmmaker Foy, Colin Smith and Steve Wienik, cracked the mystery of the Toynbee Tiler. While living in squats around South Street in the mid-1990s, Duerr began noticing red, white and blue tiles with the Toynbee message. Thus began his quest to learn the meaning of the strange, cryptic messages and find out who was responsible. Duerr began photographing the tiles, and posting on a website dedicated to the mystery.

By 2005, Duerr and others had figured out how the tiles were made, but the Tiler’s identity remained elusive.
“Even by 2005, it was not on anyone’s radar as far as the street art and graffiti artists were concerned,” Duerr recalls. “I remember going to an event at Space1026 and asking street artist Shepard Fairey (of OBEY/Andre the Giant fame) about them—strangely, he had no idea what I was talking about.” As a result, Duerr became convinced the messages were coming from somewhere outside the art world, which is one reason the film is so compelling. Duerr is convinced that the philosophy behind the Tiler’s message is religious in nature—more akin to the “Trust Jesus” messages spray painted everywhere than any type of art. “They just are pretty far out of the mainstream,” he says. 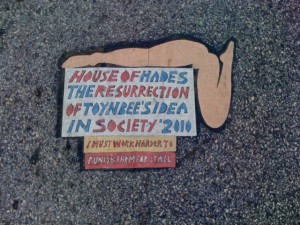 The tiles are also weirdly Philadelphian. Duerr likens them to the feeling of the city he gets when he watches David Lynch’s Eraserhead. Lynch, who lived at 13th and Wood Streets in the Callowhill neighborhood as a student at the Pennsylvania Academy of Fine Arts, has gone on record stating that the film was a product of his time in the city, referencing the “sense of dread pretty much everywhere I went.” 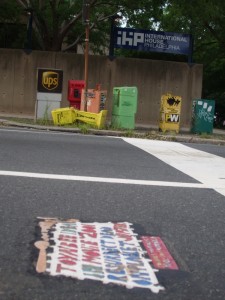 This sense of dread has been emulated by the famous “copycat” Toynbee tiles, which Duerr believes started showing up around 2005. The most common of these are done by the mysterious “House of Hades” group, which Duerr believes may be from Buffalo, NY. “They went so far as placing a tile in front of I-House right before the premiere,” Duerr says with a laugh. Duerr believes the original Toynbee Tiler is still active so keep an eye out for future messages.