Crews are in the process of transforming one of the nation’s first supermarkets–the former Acme on 48th Street between Pine and Spruce–into the Center for Culinary Enterprises (CCE), Philadelphia’s first food business center.

The project is an effort of The Enterprise Center, the veteran entrepreneurial training and start-up incubator, which is located in the old WFIL-TV studio at 46th and Market. When it is completed in July 2012, the CCE will contain three licensed commercial kitchens, a youth-run training restaurant, an eKitchen Multimedia Learning Center, and two retail spaces, including a sit-down restaurant.

Through the CCE, The Enterprise Center hopes to launch or accelerate at least 10 new food businesses a year and create 13 full-time jobs and 32 part-time jobs on-site. The business clients who utilize the shared-use kitchens are projected to create between 36 and 63 jobs annually.

In addition, the CCE will work to annually place 50 individuals in workforce positions in the culinary industry and train 100 high school students in restaurant and hospitality management. Community health and nutrition programming is anticipated to serve at least 400 individuals each year. 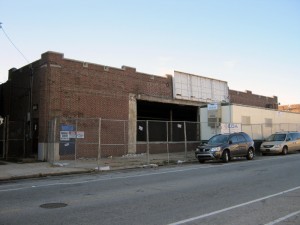 Managing Director of The Enterprise Center CDC Greg Heller explained that the building was selected because it was “a long vacant eyesore on a prominent commercial corridor.”

The supermarket was built in the late 1930s by Clarence Siegel, developer of the surrounding community. Siegel planned the neighborhood, which is roughly bounded by Spruce and Larchwood to the north and south and 46th and 50th to the east and west, according to Garden City movement design principles. This meant that the neighborhood was self-sufficient, complete with amenities such as parks and markets, and that the architecture was consonant, typically recalling the 1920s Arts and Crafts movement.

The area was added to the National Register of Historic Places in 1984. Curiously, the northern boundary of Garden Court Historic District was drawn at Pine Street, excluding the prominent Garden Court Apartments (and the supermarket) that had given the district its name.

To learn more about the Center for Culinary Enterprises, visit the project website HERE and stay tuned for additional information as the project takes shape.