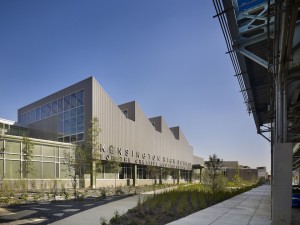 “The little interventions add up,” is how New York City’s director of public building, David Burney, put it in yesterday’s Times. “Under him,” writes architecture critic Michael Kimmelman, “and mostly under the radar, dozens of new and refurbished libraries, firehouses, emergency medical stations, police precincts, homeless processing centers and museums have been designed by gifted and occasionally famous architects. Taken together, they have brought fresh architectural standards to the city’s infrastructure and, often, to poor, middle- and working-class neighborhoods that have long been overlooked.”

“How perceptive are they!” says Hilary Jay, founding director of DesignPhiladelphia, which begins this week, in response to the New York approach. “The streets of our cities are the stage sets where we live our lives. The design that we experience surrounding us creates the culture we live in. That cultural environment shapes our common values, and ultimately those values determine our future.”

And thus the design of public buildings and public infrastructure matters. Kensington CAPA High School (pictured above) is a fine example of a quality design team–SMP Architects–being brought in to elevate a public building. In this case, “how you approach the built environment matters as an educational tool, as a creator of a sense of pride, and because it influences how people react to the space around them,” says New Kensington Community Development Corporation Deputy Director Shanta Schacter, who helped spearhead the creation of the school.

“As obvious as it is, much of the challenge to re-invigorate our public properties lies in the city’s and state’s balance sheets. I can say plenty about the power of design to change our behavior, our culture, our heritage and future, but if there’s not enough government money to keep school programs in place, libraries open, and children’s play areas intact, what’s the point? On the other hand, we could look at the support model differently. Maybe Philadelphia needs to have an alternate fiscal model, one based on corporate, funder, and individual giving. It would be an interesting experiment to see if there’s substantial public good will and understanding of the way design effects our lives in order to open pockets and raise significant dollars. I personally haven’t seen that happen, but perhaps through collaboration, there may be a significant opportunity to see what New York is doing and follow suit, altering our environment for a richer urban experience.”