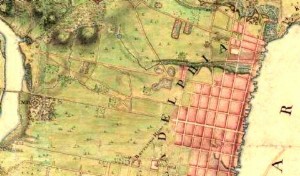 From a 1777 map of Philadelphia, showing Pegg’s Run (Cohoquinoque Creek) rather prominently.

Willow Street is a rare curvilinear street near Center City that winds its way eastwards from Ninth Street through what is sometimes called the Callowhill Industrial District. It ends at Second Street, having been cut off from Delaware Avenue by Interstate 95.

Willow Street parallels nearby Callowhill Street, but it just doesn’t fit neatly into Philadelphia’s regular street grid. Plus, it’s a wavy street in a city known for not having wavy streets. The reason for this is that Willow Street follows the course of Cohoquinoque Creek, a once-prominent stream that emptied into the Delaware in earlier times. “Cohoquinoque” was the name of a nearby Indian village. Spelled various ways, the word is said to be derived from a Lenni-Lenape word meaning “grove of long pine trees.”

Accounts vary, but Cohoquinoque Creek arose around the present-day intersection of Fifteenth and Spring Garden Streets, and was also fed by a well-known spring in the Spring Garden District. The creek was later named Pegg’s Run after a Quaker brickmaker named Daniel Pegg. 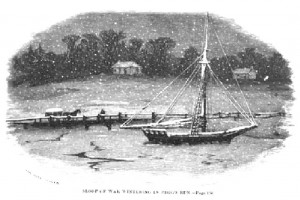 “SLOOP OF WAR WINTERING IN PEGG’S RUN,” from Watson’s Annals.

Cohoquinoque Creek was deep enough to be navigable by small craft. Farm products were routinely floated on flat boats to the Delaware River for a short trip downstream to get to street markets in Philadelphia. Young people would row their way up the stream on moonlit nights.

Pegg’s Run became tremendously polluted as early as the late 18th century, with numerous abattoirs, tanneries, dye makers, and other early Philadelphia industries located along its embankments. But after the sewer was built, the shops and factories along the Cohoquinoque’s former banks continued to discharge their wastes into the enclosed stream and out to the nearby Delaware River. 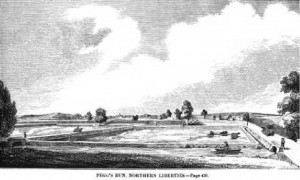 The full length of Willow Street was placed atop the culvert by 1829. The land on either side of the street became densely filled with residential and industrial buildings by the mid-19th century. Occupying a good part of the Northern Liberties and Spring Garden Districts of Philadelphia County, the region had first been settled in the early 1800s by wealthy Quakers who had moved out of the congested original part of Philadelphia.

By the 20th century, however, this locale was squarely at the center of Philadelphia’s tenderloin/skid row district. Abandoned houses and factories made the area look run down, so much so that city planners in the 1950s and 1960s considered it very blighted. And so, hundreds of 19th century dwellings and commercial buildings were condemned and demolished in the late 1960s as part of the Franklin-Callowhill East Urban Renewal Area project.

Some twenty city blocks were included in this undertaking. All of Willow Street ran right through it. Many streets were also removed from the Philadelphia street grid in this vicinity. Yet Willow Street was left alone. This is because the sewer, out of necessity, had to stay in place. The Willow Street sewer thus saved Willow Street from being obliterated. 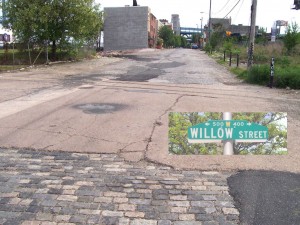 Front Street at the site of Pegg’s Run, looking south today, showing where Willow Street was before it was cut off by I-95. The Willow Street sewer is beneath.

The Franklin-Callowhill urban renewal project was supposed to create large tracts of open land for use as an inner-city industrial park. But the resulting Callowhill Industrial District was ultimately unsuccessful, as Philadelphia’s de-industrialization was fully underway by the 1970s. The urban wasteland in this vicinity is the result of this misguided urban redevelopment effort. Again, all of poor Willow Street runs through this zone.

The Willow Street sewer drains much of lower North Philadelphia between Vine Street and Fairmount Avenue east of Broad Street. Cavanaugh’s River Deck occupies the pier under which the sewer still enters the river. The natural mouth of forgotten Cohoquinoque Creek, however, would have been a block or so to the west, near Front Street.