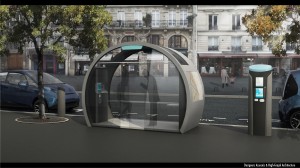 Electric car sharing begins in Paris and Philadelphia this month. Organizers in the White City will introduce Autolib (modeled on Vélib, the white city’s much-lauded bike share), to 100 test users until a wider launch in December. Autolib is a project of the Bolloré Group, an industrial firm with close ties to the Sarkozy administration. Bolloré designed the all-electric “Bluecar,” which can travel 155 miles on a charge, and the charge stations, which are being built in Paris and the suburbs. The City of Paris is investing $46 million in the project. The city’s transit director expects 3,000 Bluecars, with an annual subscription cost of $190 (+ an hourly fee), running within a year.

Here, according to Samantha Wittchen in Grid Magazine, a partnership of the Mayor’s Office of Sustainability, PhillyCarShare, and the PA Department of Environmental Protection will unveil a test project with 16 hybrid electric vehicles and four charge stations–at the University of Pennsylvania, Drexel University, Temple University, and the Pennsylvania Horticultural Society, at 20th and Arch. This is the largest electric car share initiative on the east coast, yet limited by the small charge range–35-100 miles–and the scarcity of charge stations.

The upside here is that PhillyCarShare already has 13,000 subscribers, who pay a $125 annual membership (+ an hourly fee and mileage). PhillyCarShare was recently acquired by Enterprise Rent-a-Car parent Enterprise Holdings and the fresh cash is expected to make expansion of the electric fleet possible. Will the charge-station infrastructure follow?