Once A Church Of The Brethren 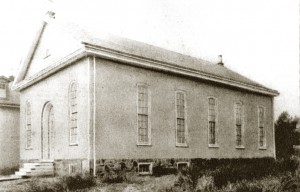 Number 115-117 E. Mt Airy Avenue isn’t your everyday Philly twin house. The long, plain sides, the gable end facing the street…  these lines give away the building’s origins as a long-ago house of the Lord.

At present, the owners of 117 are replacing old arched windows with easier, cheaper square ones. This happens a lot — it’s always a shame when it does — but even more so in this case because the structure was built as a church for the United Brethren in Christ. By 1880 the Mount Airy Presbyterian Church bought the building from the Brethren.  Some time later the church was sold again, the great interior space divided both horizontally and vertically by the construction of a second floor and party wall. Windows and doors were walled over, and new ones cut into the walls. Today just the arched top of the center attic window is original to the church. 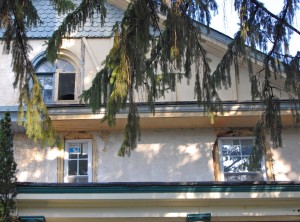 That the Brethren are the original builders ties back to William Penn’s idealism, his express determination that Philadelphia and Pennsylvania be a “noble experiment” in tolerance.  Belonging to what would have been judged a heretical sect of Christianity in the old country could get you at best harassed, at worst imprisoned or executed.  Not only could established (if outlawed) denominations move here without fear, but new ones could come into being as well.  The United Brethren in Christ was the first of these American denominations, started in Lancaster County in 1767.

It’s fortunate that this building with its storied history still stands and is occupied.  But with each renovation, the Brethren’s Mount Airy church gets a little harder to recognize.