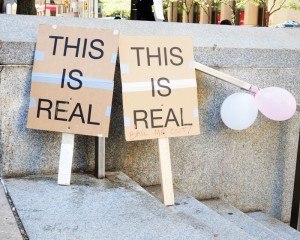 Editor’s note: Katrina Ohstrom brought her excellent eye (and lens) to the Occupy Philadelphia protest yesterday (and she’s there right now). I wrote this morning about why this event matters to us at Hidden City: it’s telling about the place. City Hall isn’t the Piazza (a public-seeming private space) or even Independence Hall (a public space privatized for ticket holders): it is open territory, and in a sense, always has been (Centre Square was so often the site of public demonstrations in the 19th century). More than that, the occupation tells us a bit about who we are today, seeking to make this beguiling, sprawling, mysterious city our own. We do this everyday of course, but in a city with 40,000 vacant lots, we’re constantly repossessing, activating, rethinking, and occupying spaces in new and energizing ways. City Hall is no exception. Today, Katrina brings us into the planning of the event–in essence what it means to occupy the space. In coming days, she’ll reveal some of the people and their motivations for inserting themselves so profoundly into the body of the city.

With the Occupation of Wall Street well into it’s third week, the movement, which was initially underreported and remains misunderstood by many media sources, is rapidly spreading throughout the country and abroad. 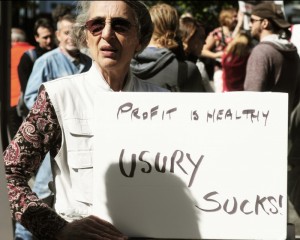 These occupations are, in the broadest sense, a call to end unsustainable economic inequality.

With more than 1,000 in attendance for the planning meeting, the Philadelphia Occupation took it’s time and learned from the mistakes of both the New York Occupation and the NYPD. At 9:00 on Thursday October 6th, on the West side of City Hall, the Occupation of Philadelphia officially began. ‬

The careful planning was evident in the stations for food and medical care, the smoke-free family zone with toys and craft supplies, the area sanctioned by the city for tents for those who choose to occupy around the clock, and with reminders to the Occupiers to not only keep Dilworth Plaza clean, but also to respect and reach out to the homeless who call it home. 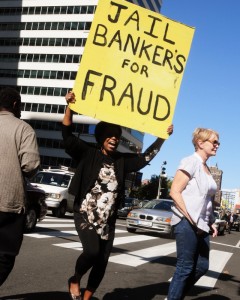 In addition, the ACLU and the National Lawyers Guild are providing representation and Legal Observer training. There have been committees formed to cover just about everything including, perhaps most importantly, a liaison between the Occupation and Mayor Nutter and his staff and the Philadelphia Police.

Occupy Philly
Occupy Wall Street
We Are The 99 Percent