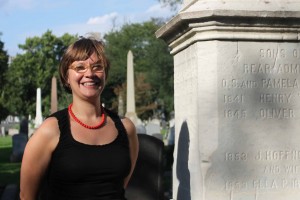 With the dirt still fresh from excavation, the Woodlands has been the site of intense investigation by College of William and Mary graduate student Sarah Chesney. The newly revealed three-foot section of brick and stone foundation from the site’s long demolished historic greenhouse provides a tangible link to the vast, 140-foot structure said to contain 10,000 rare and exotic plants at its height in the early 19th century.

The greenhouse once housed the specimens from Lewis and Clark’s expedition, while the extensive arboretum featured the first gingko tree to be planted in the United States (thank you William Hamilton!). Originally spanning 600 acres, the Woodlands estate made up a sizable portion of West Philadelphia in the late 18th century and hosted some of the country’s most influential historical and social figures. With much of the land sold by Hamilton’s heirs, the Woodlands Cemetery Company bought 92 acres to develop a rural cemetery, which has remained continuously active since 1840. 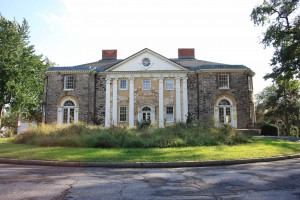 All this leads us to the obvious questions: why isn’t this site better known and better used?

New executive director (of both the historic site and the cemetery company) Jessica Baumert is charged with figuring it out–and reversing decades of decline. It’s a job that has confounded her predecessors.

Baumert has spent the past ten years as a senior conservator at the Fairmount Park Historic Preservation Trust so she brings both a practical knowledge of architectural preservation and a sense of how to widen our understanding and appreciation of cultural landscapes. Baumert will continue the site’s mission, but she will also craft new community partnerships to expand the site’s use and significance for the future. 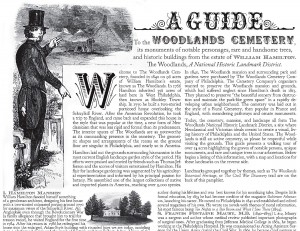 With its multi-layered history and beautiful landscape along the Schuylkill River, the site attracts a myriad of visitors every day. Efforts to quantify visitor use and knowledge of the site have revealed widespread ignorance and misunderstanding. More than half of those surveyed don’t realize the cemetery is active and few understand the role of the Hamiltons and their pioneering horticulture. Baumert’s challenge will be to figure out how to bridge that gap most effectively. “Most visitors use the site for recreation, so it’s hard for them to think of us as a privately owned active cemetery and historic site,” she told me in a recent interview. “We encourage recreational use, but we need to find a way to educate and involve those visitors. That’s something I really want to work on.”

In the past couple of years, the Woodlands has partnered with University City Green on site cleanup days, tree pruning and planting, while beekeeper Daniel Duffy has been harvesting an apiary and leading beekeeping workshops and Erica Smith Fichman has founded the site’s first community garden. These efforts are expanded by a further investigation into the site’s historic landscape, which featured the arboretum and the greenhouse. 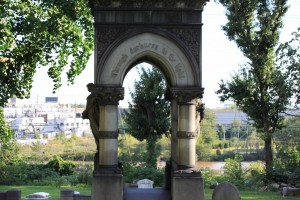 View of the Schuylkill River through a funerary monument. Credit: Lauren Drapala.

With the restoration of the mansion’s windows currently underway, Baumert has long-term plans to restore the mansion and explore the opening of the crypto-porticus and basement servant areas for special tours. The site will potentially be incorporated into the Schuylkill River West Trail, connecting the site to its historically contemporary botanical site, Bartram’s Garden.  With efforts towards developing a Master Plan for the house and its landscape, Baumert’s job is complicated, but an extremely important one for West Philadelphia and the greater city.

Aaron Wunsch, a Woodlands board member and University of Pennsylvania professor of architectural history, feels confident that Baumert will help the Woodlands turn the corner. “I really can’t imagine a better person for the job. She’s enthusiastic and broadly competent–a skilled manager with a firm understanding of preservation from both a practical and theoretical standpoint. She strikes me as very organized, which is what’s needed to get this place back on track.”